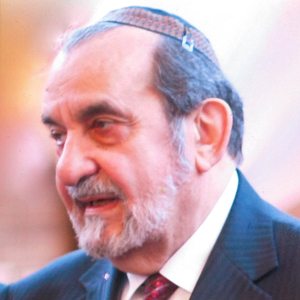 The Yeshiva University family was saddened by the passing of Velvel Pasternak, a leading publisher of Jewish music who recorded and transcribed, and thus preserved, traditional music from Hasidic sects. The obituary in the New York Times equated what he had done to preserve Hasidic music to what Alan Lomax had done for folk music.

He also had a strong connection to YU. Born in Toronto, Canada, Pasternak came to the Marsha Stern Talmudical Academy/Yeshiva University High School for Boys in 1949, spending his junior and senior years there.

“My high school experience was very, very interesting,” he said in an interview with YU News in 2016. “I came from a public high school where I had to keep a yarmulke in my pocket to a school where there were Jewish subjects along with the secular subjects. The teachers were very, very good. We lived three boys in a room on the fifth floor, and it became my home for 10 months of the year.”

He went on to earn a BA from Yeshiva College, but while there, he had the opportunity to also attend classes at the Juilliard School; unfortunately, he said in the interview, it meant dropping out of the shiur [lecture] given by Rabbi Joseph B. Soloveitchik, something considered quite unusual. “I wanted to do homiletics through music,” he said, which he did at both Juilliard and Columbia University, where he earned an MA in Music Education.

While at Yeshiva College, he was also quite the entertainer. Dr. Herbert C. Dobrinsky, vice president of university affairs, recalled how Pasternak would entertain his fellow students by playing his music on the piano in the Muss Residence Hall. “He was deeply cherished by his classmates, especially the Canadians, who attended high school and Yeshiva College, because he was so much fun to be with.”

In the 1950s, Pasternak pioneered the recordings of Hasidic discs and served as choral arranger and conductor for numerous popular Hasidic recordings which included those of Moditz, Bobov, Lubavitch, Gerer and many others.

Pasternak spent one year in Israel having received a stipend to research the origins, development and usage of Hasidic song.

Pasternak founded Tara Publications, the world’s largest publisher of Jewish music, and for more than five decades, he was on the forefront of bringing Jewish music to the world in all its different forms: Hasidic, Yiddish, Israeli, Ladino, Oriental and Cantorial, and so on.

His success at his vocation, however, was by no means assured when he first started out. “After I did my first recordings, I decided to put the music into print. I created a manuscript of Hasidic music, which I was told nobody wanted, nobody needed, and that I couldn’t sell 10 copies of it,” he recalled.

“So, I approached cantors in America who knew my work with the recordings, and I told them I had a new book, and for $7.50—including postage!—they could get this book. And lo and behold, I got 300 orders from all over America on a book that they hadn’t seen but based on the fact that I had done these recordings. And then I ran to the printer and said, ‘Print!’ And that started it.”

A charismatic personality, Velvel Pasternak spread his love for Hasidic music to thousands of young people and adults in classrooms and through extensive lectures throughout the United States. His energy and humor, along with his extensive knowledge, will be sorely missed.

(Special thanks to Cantor Eric S. Freeman, director of the Philip and Sarah Belz School of Jewish Music, and Cantor Bernard Beer, director emeritus, for their help in composing this.)