According to Jim Millstein, co-chairman of Guggenheim Securities, LLC, and Laurence Grafstein, deputy chair at RBC Capital Markets, investment banking in 2020 is experiencing a renewed wave of interest as the active money management business comes under threat from passive investment vehicles. Grafstein added that “advisory boutiques” serving “middle market” companies are in a great position as private sources of investment capital, including private equity firms and venture capitalists are paying an outsized percentage of merger and acquisition (M&A) advisory fees as funds turn to M&A instead of the initial public offering (IPO) market for exits. This was the assessment of the two banking veterans at “The State of Investment Banking” on Feb. 12, 2020, an event organized by the YU Wall Street Group and hosted by the international law firm Davis Polk.

The two men, under the expert questioning of Moshe Orenbuch ’84YC, managing director at Credit Suisse, also spoke about many other topics, including the (mostly beneficial) transformations caused by financial technology, or “fintech,” the (mostly unbeneficial) disruptions wrought by climate change, cryptocurriences, the call to break-up big tech companies and the questionable quality of much of the debt being carried by corporations.

After their discussion, they held a spirited Q&A with the 100 people in the room, many of whom were students from the Sy Syms School of Business. For Daniel Ferber ’20SB, who has pursued an internship in investment banking internship, “the most important part of the event to me was how eye opening the two speakers were when it came to the U.S. economy and the trends that the investment banking industry has gone through over the past several decades.” Meir Lightman ’22SB also found their comments on the economy insightful, especially “the huge bubble in corporate and consumer debt and how, with interest rates being so low, the Fed will have fewer levers to use when the next downturn hits.” 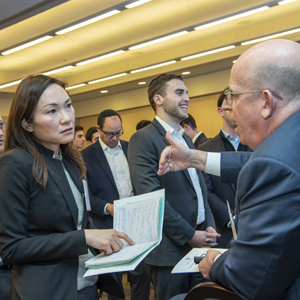 Solomon Shulman ’20SB, who will be starting work at RBC this March with Grafstein, was glad to have the chance to pose a question to what he called “two Wall Street legends” about the disruptive effects of fintech technology and delighted by the fact that they had “very different answers.” Adam Baron ’21SB will be working as an investment banking summer analyst at Goldman Sachs this summer, and he described the event as “an incredible learning opportunity. Hearing from such high-caliber speakers is a rare opportunity for a college student, and the panel was thought provoking and insightful on the broader ramifications of the new state of the investment banking industry.”

Lawrence Askowitz ’87YC, co-chair of the Wall Street Group, was pleased by the way events like this gave students and industry professionals an unparalleled opportunity to network and discuss recruiting, internships and career advancement. He did have a different angle on Millstein’s warnings about corporate debt levels and impending defaults, seeing the situation as “a natural by-product of such a long period of low interest rates” and that defaults were likely coming from only a handful of sectors with particular dynamics. Overall, though, “the presenters did an excellent job describing the evolution of the corporate advisory business and the re-emerging interest in this line of work.”

The YU Wall Group is one of the many professional networking groups supported by the Office of Alumni Affairs. Find more information about all the groups at www.yuprofessionalnetworking.com 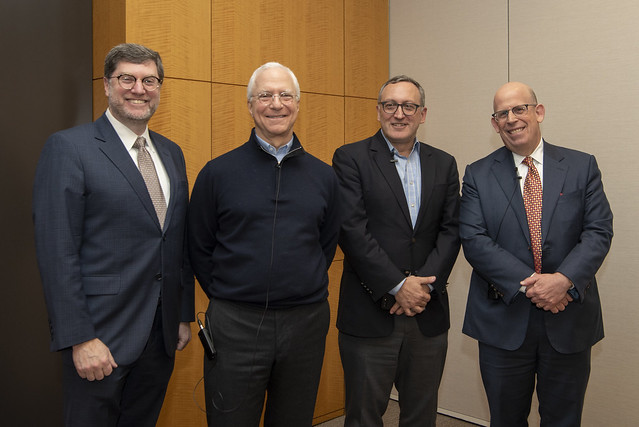