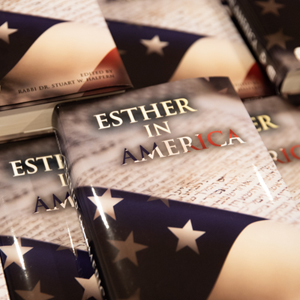 On Thursday, February 11, 2021, the Museum of the Bible, in conjunction with the Zahava and Moshael Straus Center for Torah and Western Thought, hosted a virtual panel discussion to celebrate the recent publication of the book Esther in America.

The discussion, attended remotely by approximately 250 people, was a small sampling of the fascinating topics found in Esther and America, which explores numerous ways the biblical book of Esther shaped America’s history and continues to be used as a model for contemporary challenges that America faces.

Dr. Leibovitz commenced the night by highlighting the fact that the book of Esther, which tells the remarkable tale of an orphan Jewish woman rising to the position of queen of Persia, remains a timeless paradigm of hope and courage in the face of adversity. The message of the book of Esther can shed light on an enigmatic Talmudic passage which states that on Purim “one is obligated to become so intoxicated that they no longer can distinguish between ‘Cursed is Haman’ and ‘Blessed is Mordechai.’” To Dr. Leibovitz, the passage is teaching us that on Purim, the day in which we read and internalize the messages of the book of Esther, a person is able to see the light that is within the darkness or the “Blessed is Mordechai” that is found within the “Cursed is Haman.” “One spark of hope and one spark of human courage can bring in a lot of light,” said Dr. Leibovitz. Esther’s heroic actions have inspired Americans for centuries, and its timeless message continues to be more relevant than ever before.

Dr. Brown focused her comments on the often overlooked and underappreciated Vashti. Whereas the ancient Jewish commentators typically vilified Vashti and assigned little value to her part in the grand story of Esther, Vashti has intriguingly been adopted as a model for American women’s and civil rights causes. For example, for Elizabeth Cady Stanton and the Women’s Rights Movement, Vashti’s courage to stand up to Ahasuerus and his male show of collective hedonistic glee was seen as a symbol of standing up to patriarchal tyranny.

Dr. Troy discussed how the story of Esther parallels the first ladies of American presidents. Just as Esther’s power was due solely to her relationship with the king, so, too, the first lady’s power lies solely in her relationship to the President. However, their lack of independent power does not necessarily mean a lack of influence. To the contrary, just as Esther used political savviness to ultimately save the Jewish people, politically savvy first ladies have made their marks on American policy. Troy gave the examples of Hillary Clinton, Betty Ford and Nancy Reagan, who all famously influenced their husbands in their presidential policies.

The discussion continued with remarks from Rabbi Dr. Halpern, editor of Esther in America. He first highlighted two historic American events that were influenced by the book of Esther and, in turn, influenced American history forever. In 1853, Isabella Baumfree, more famously known as Sojourner Truth, took the stage in New York City at a Women’s Rights convention and, in opposition to a vicious mob protesting her cause, called on the president of the United States to heed to the message of the book of Esther and grant women equal rights just as King Ahasuerus had granted Esther her requests. Another incident occurred in 1862, just nine days before the Emancipation Proclamation was announced, when Pastor William Weston Patton reminded President Abraham Lincoln of Esther’s courage and the risk she took to achieve salvation for a minority people.

Halpern concluded by explaining why he believed the story of Esther has had such an impact. The Scroll of Esther is the only book of the Bible that does not mention God’s name. It is a story about self-determination as opposed to relying on an external entity for redemption. “Esther teaches us that salvation is not something that appears magically from some other place,” explained Rabbi Dr. Halpern. “It is on us, on our individual human moral actions, on our choices, on our courage, to actually do what is right.”

Learn more about Esther in America, published by the Straus Center, and purchase the book on Amazon.