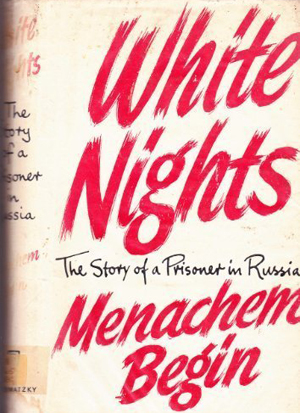 In times of turmoil and civil unrest, people have a predictable tendency to return to George Orwell’s classic novel, 1984. Indeed, we are living through such a tumultuous period.

However, I propose that we turn to another work to inspire and enlighten us in this unpredictable time.

In 1957, Menachem Begin published a remarkable memoir of his years in a Russian prison during the Second World War, entitled Leilot Levanot or White Nights: The Story of a Prisoner in Russia. Much like Begin himself, White Nights captures the depths of Jewish suffering and the heights of Jewish triumph when the world was black as night. White Nights is startling for its similarities to Orwell’s authoritarianism, but upon closer reading, it is clear that Begin’s memoir serves a higher purpose: it is the call to action that Orwell never made.

When the Nazis invaded Poland in 1939, Begin and his wife, Aliza, fled to Soviet-occupied Vilna, where they continued to engage in underground Revisionist-Zionist activity. Quickly deemed a threat by the Soviets, Begin was arrested in 1940 and spent the next two years a prisoner in the Soviet gulag system. From his recollections and reflections of that time emerged White Nights.

White Nights has many echoes of Orwell’s 1984. In Orwell’s novel, “thoughtcrime” plays a central role in the life of Winston, the protagonist. Winston, whose first act of resistance is to buy a journal in which to write his private thoughts, lives in perpetual fear that he will be arrested and vaporized.

In White Nights, freedom of thought is equally criminal. In one heated exchange with his Soviet interrogator, Begin maintains that he is entitled to state his opinion during the relentless interrogations. “There is no charge for what one thinks,” Begin insists. But the interrogator is incredulous. “With us,” the officer taunts, “you do pay for your thoughts and we know all about those thoughts…”

Propaganda is similarly inescapable. In 1984, Winston describes the telescreen, an instrument that, in addition to spying on the citizens, would broadcast incessantly and could never be turned off. Begin’s recollections were no different: “In one of Vilna’s large squares a loud-speaker had been erected,” Begin describes. “From morning to night, the loudspeakers incessantly blared forth speeches, announcements, decisions and proclamations.”

Begin’s memoir captures the essence of Begin, his visions for Jewish political independence and the spiritual and physical liberation of the Jews. Through his unwavering commitment to safeguarding human dignity and his willingness to resist the Soviet regime, Menachem Begin’s voice transcends the circumstances of his imprisonment and speaks to the eternal yearnings of his people. Much like Winston Churchill, whose orations in times of mortal peril cemented his status as a great statesman, Begin’s story of a prisoner in Russia warns of great dangers to come if the threat of communism is not heeded. White Nights was his prophetic call to action.

In his commentary on the Prophet Isaiah’s calls for King Chezkiah to repent, Rabbi Jonathan Sacks z”l draws an important distinction between prophecy and prediction. Predictions, Rabbi Sacks explains, are successful when they come true. The prophets, on the other hand, do not make predictions. Rather, their prophecies warn of the calamities to come if a different path is not taken. “If a prophecy comes true, it has failed,” Rabbi Sacks concludes.

1984 is a prediction that came true, as evidenced by White Nights, but it does not allow the reader to pursue a course of redemption. When Winston is caught, he is tortured to the point of submission and his free will is vaporized. The resistance is no more.

But Begin’s book is prophetic: “Whoever reaches the gulf,” Begin warns, “has the choice either of bridging it or of falling down into it. And when a people does not bridge the gulf, instead of development comes explosion; instead of progress, disaster.” If we do not resist the forces of absolutism and tyranny, Begin warns, then we submit ourselves to a certain physical and spiritual annihilation. Begin suffered tremendously, but his survival (and the survival of his people) defies his prophecy.

Begin dedicates White Nights to the Unknown Martyr, endowing the nameless victims of tyranny with the dignity of remembrance. These nameless masses, vaporized and lost to the abyss, are afforded no such honor in Orwell’s dystopia. Grief and remembrance do not exist in a society that routinely re-writes its past, present and future. In Orwell’s world, “there were fear, hatred, and pain, but no dignity of emotion or deep or complex sorrows.”

Begin’s book is a work of great emotion, of simultaneous joy and sorrow. Begin lives to avenge the nameless martyr, and Jewish survival—and the Jewish State—is the triumph that Orwell’s book ultimately lacks. “We make the future by our choices,” Begin reminds his readers. “The script has not yet been written. The future is radically open.”