It was an issue of academic freedom, cultural change and personal integrity—but Elie Friedman, then a history student at Yeshiva College, needed to know more.

He originally came across the January 1967 Supreme Court case while looking through years of The New York Times back issues for Dr. Ellen Schrecker, professor of American history at Yeshiva College. Schrecker was working on the most recent of her many books, The Lost Soul of Higher Education: Corporatization, the Assault on American Freedom, and the End of the American University, and Friedman, who had just finished his freshman year, was her research assistant. His mission: to seek out and analyze articles that tracked the battle for academic freedom in universities across America over the course of months and years during the 60s and 70s.

“It was a first-hand introduction to history, not just reading about it in books,” said Friedman, a native of Teaneck, NJ. “I was reading newspapers from 40 to 50 years ago day by day, the same way I read newspapers today.”

But one front-page Times article stopped him in his tracks.

The article, “High Court Voids Laws on Loyalty in State Schools,” detailed a Supreme Court decision to overturn a group of New York State laws which required and enforced the removal of “subversive” public school personnel who committed “treasonable or seditious acts.” The case had come to the court’s attention after the laws were cited by the State University of New York–Buffalo as justification to let five employees go in 1965 for refusing to sign an oath of loyalty to the university. The fired staff, including one Harry Keyishian, a recently-hired English instructor, took their case all the way to the top, where, for the first time, academic freedom was evaluated as an expression of free speech under constitutional protection.

“What interested and excited me about it was that most of the research I was doing for Dr. Schrecker was about the intersection of academic freedom and cultural phenomena, but this case saw academic freedom recognized under the first amendment,” said Friedman. “Suddenly, everything I had been seeing as ephemeral cultural ideas were becoming concrete structures of law.”

Though the case was not directly related to her own work, Schrecker encouraged Friedman to further investigate it independently, even nominating him for a Henry Kressel Research Scholarship, which he was awarded. And investigate he did.

Friedman headed out to Washington, D.C., to search the archives in the Library of Congress and at the SUNY-Buffalo campus where the incident occurred. He even tracked down Keyishian, one of those who had started the ruckus nearly 50 years earlier, now a professor at Fairleigh Dickinson University. Keyishian sent Friedman diary entries he had composed at the time and talked about the way the events of that decade impacted his life and career.

Friedman was fascinated. “It was very interesting to see how legal and historical research could mesh and complement each other,” he said. The case became the basis of his thesis for the Jay and Jeanie Schottenstein Honors Program, and he later condensed his research into an article titled, “ ‘A Special Concern’: The Story of Keyishian V. Board of Regents,” which was  published in the Journal of College and University Law—a rare feat for an undergraduate in the historical field. 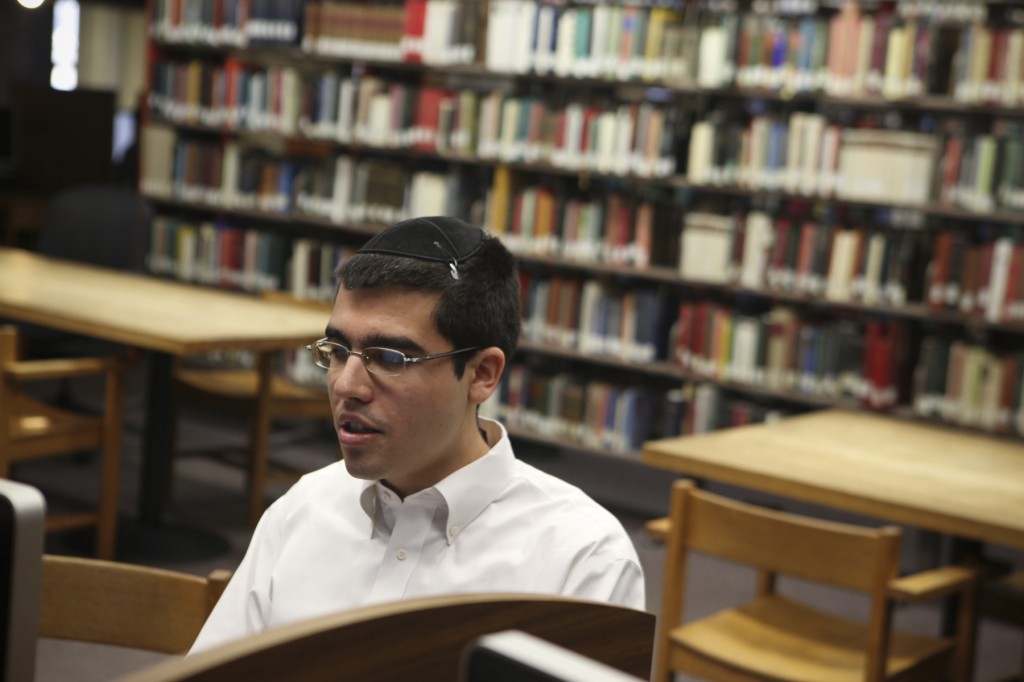 “Elie Friedman is a brilliant and original thinker,” said Schrecker. “One of the things historians have to do when they deal with primary research materials is figure out how to organize the information, and he did that almost instinctively. It was like having a colleague in my classes.”

As Friedman continued to work closely with Schrecker over the semesters that followed, his fascination with legal history became a guiding theme in his undergraduate and graduate careers. “I was really interested in law, the rules that society creates for itself and how they manifest in people’s everyday lives,” he explained.

While still an undergraduate, Friedman began simultaneous studies at YU’s Rabbi Isaac Elchanan Theological Seminary and Bernard Revel Graduate School for Jewish Studies. He graduated from Yeshiva College in May 2011 and will complete his master’s degree this summer, with semikha [ordination] to follow next year. Rabbinic and halakhic [Jewish law] studies dovetail perfectly with his interests in American law and history. “The idea that I could study law in the context of history definitely came from my study of gemara and seeing the tensions of how halakha plays out in everyday life.”

Currently, Friedman is a rabbinic intern at the Organization for the Resolution of Agunot (ORA). In the fall, he will balance his advanced Judaic learning with further exploration of the legal history field in a joint law and history program at Yale Law School.

“What got me through all the different stages of research and college applications was having Dr. Schrecker as a mentor,” said Friedman. “She is a prominent scholar in her field and a great resource because of many professional connections, but at the same time down to earth and warm and caring on a personal level. She takes an active interest in her students and helps them pursue things they may not even realize they wanted to do.”

Friedman felt his relationship with Schrecker was one of many fostered by the intimate classroom atmosphere at Yeshiva University. “Because YU is small, it creates a much deeper experience and greater array of opportunities,” he said. “Most of my classes had around 10 students in them and you develop such a strong connection with your professors in that environment.”

Schrecker agreed. “One of the major benefits of a YU education is that our students truly know us and we truly know them. Here, Elie was able to do the kind of research that someone in graduate school or a faculty member might… He has already started his scholarly career.”