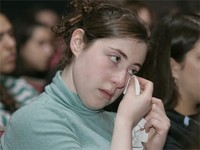 Mar 14, 2008 — “I was there [in Israel] when it happened. I heard the sirens all night,” said Alyse Neumark, a sophomore at Stern College for Women. She was talking about the shooting of eight young men at Yeshivat Mercaz Harav in Jerusalem on March 7.

“It was important to come back to America and see how the YU community and the greater Jewish community of New York came together to memorialize the victims,” said Alyse. “It shows solidarity, even though we are not there, which is so hard.”

Over three hundred people mourned the victims at a quiet and solemn hazkarah (memorial service) at Schottenstein Cultural Center on the Beren campus on March 13. It was a community-wide event held by Yeshiva University and its student bodies, SOY/TAC and the Israel Club, as well as the Conference of Presidents of Major Jewish Organizations, the Jewish Community Relations Council (JCRC), and the Israel Consulate.

Effi Eitam, a Knesset Member and a former student of Yeshivat Mercaz Harav, was on the scene of the terror attack shortly afterwards. “Nothing can prepare you for what I found there—and I have been involved in the army for over 30 years,” Eitam said at the memorial ceremony. “We don’t have to wait or hesitate to combat terror.”

Other speakers included Malcolm Hoenlein, executive vice chairman of the Conference of Presidents; Rabbi Kenneth Brander, dean of the Center for the Jewish Future at YU; Daniel Gillerman, Israel’s Permanent Representative to the UN; Meir Sheetrit, Israel’s Minister of the Interior; Amb. Asaf Shariv, Consul General of Israel in New York; David Borowich, co-chairman of the JCRC’s Commission on Israel and International Affairs; Laura Shuman, president of the Torah Activities Council at Stern College for Women; and Yosef Bronstein, a YU student who studied at Mercaz Harav.

“When the attack happened, we were on spring break so we mourned on our own,” said Hart Levine, a student at the University of Pennsylvania. “It was helpful to come together as a community and share together in sorrow, but also hope for the future.”