A Conversation on the Role of Humanities, History and Human Rights Advocacy in Helping Societies Recover

However one defines “genocide”—whether as a synonym for any mass killing regardless of size or as an act done with the “intent to destroy, in whole or in part, a national, ethnical, racial or religious group”—one can only conclude that they are depressingly common throughout human history.

Within the past three decades, we have had Rwanda, Bosnia, Darfur and the Rohingya in Myanmar, to name just a few, and the 20th century had been especially bloody, with 27 million Soviet peasants killed by famine joining the 6 million Jews of the Holocaust and the 3 million Cambodians killed by the Khmer Rouge. Again, “just to name a few.”

And a genocidal act is never “done” because its damages live well beyond the time and date of their happening into the following generations, who must deal with the guilt, anger, outrage and need for reconciliation that inevitably follow in the wake of the atrocity.

On Wednesday, April 10, 2019, four academics and human rights professionals came together to offer something of a snapshot of what has been and is being done to achieve “transitional justice,” work undertaken to help societies recover from atrocities. “Genocide Prevention: A Conversation on the Role of Humanities, History and Human Rights Advocacy,” was organized by Meirah Shedlo, academic advisor and special projects manager at Yeshiva University, as part of the Provost’s Colloquium Initiative. The panelists included Dr. Louis Bickford (CEO of Memria), Dr. Douglas Burgess (assistant professor of history at Yeshiva College), Dr. Vera Békés (assistant professor of clinical psychology at Ferkauf Graduate School of Psychology) and Faraz Sanei (Visiting Instructor of Clinical Law and the Telford Taylor Teaching Fellow with the Benjamin B. Ferencz Human Rights and Atrocity Prevention Clinic at the Benjamin N. Cardozo School of Law).

While each is committed to making “Never Again” an actual truth in human society, they also agree that doing so is incredibly difficulty, because the tools have are either too inexact or too limited and the complexities of human culture can be the biggest impediment to achieving reconciliation. 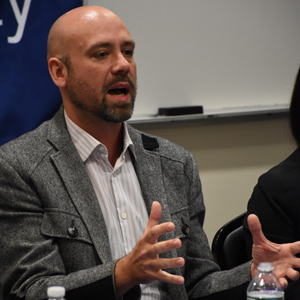 For instance, as Dr. Burgess noted, “a trial is blunt and can’t really get at the full truth” because a trial works by starting with a blank canvas upon which is reconstructed the crime. “The danger is,” added Dr. Burgess, “is that no crime will emerge,” even if a great wrong has been done. And in trials dealing with genocide, such as with the Nuremberg trials after World War II, it can difficult, if impossible, to separate the defendants from their symbolism, which complicates issues of punishment and restitution. 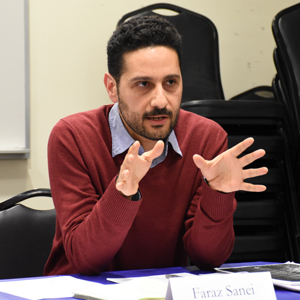 But as Sanei pointed out, while the commissions can unleash “the powerful effects of truth,” they cannot always deliver justice. For instance, in Rwanda, while the special courts set up for the commission heard an estimated 1.9 million public cases, the process, inevitably overwhelmed by the caseload, came up short on the vital question of reparations for victims, and many of the defendants demanded immunity for their truthfulness, meaning that, over time, the perpetrators, unpunished, went to live among those they had brutalized. A Human Rights report published in 2011 concluded that while the commission “may have served as a first step. . . it did not manage to dispel distrust between many perpetrators and survivors.” 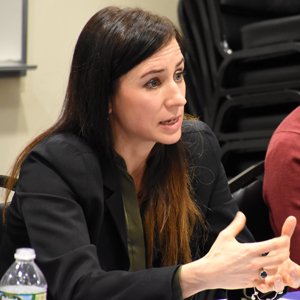 But because these efforts do not produce the expected results, noted Dr. Békés, does not mean that they don’t have value for the individuals and communities involved in the process. “Very important things happen here, as my work has showed me,” she pointed out. The processes help to establish a narrative, an accepted script for what did and did not happen, told in voices that, up to that point, had been considered marginal or worthless. On a personal level, she continued, “the chance to tell a story, even if that story doesn’t go any farther than the person telling it, is a powerful move towards personal healing”: being acknowledged can restore one’s emotional and spiritual health.

“There are also the benefits of archiving, of memorializing, of the reconstructions of normality,” she added, “all of which are forms of acknowledgement crucial to getting past the trauma and invisibility.” 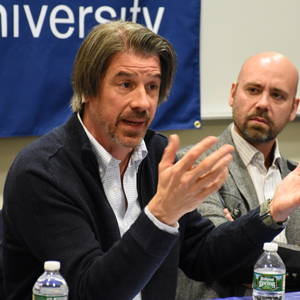 If the usual memorials are written by the victors, said Bickford, “then these kinds of efforts to bring out the truth is a way of saying, ‘Maybe they don’t always get to write the story.’” He noted the recent efforts by New York City to erect more statues of women in the city’s parks and the New York Times to publish obituaries of those who did not make the cut back in a white-male-dominated era, which has meant more women, more people of color, more ordinary people. “Liberation movements,” he added, “can fight on this enlarged terrain, using a fuller history that’s not so curated. ‘Knowledge’ doesn’t always lead to ‘acknowledgement,’ but these new histories make that more possible.”

All agreed that making that “fuller history” possible requires a shift in cultural attitudes and behaviors that is, as Sanei understated it, “a tall order.” Perhaps religious leaders can do it, or religious leaders in league with political leaders who want to institute a proper program of memorializing, or all of that in concert with a “citizenship education” campaign. None of the panelists could say with any certainty how that shift happens, only that anything like transitional or restorative justice will happen only when that shift takes place.

In a brisk Q&A session after the formal presentation, students raised many insightful questions: Can the focus be placed on victims without involving the perpetrators? Is it better to whitewash a history or deny it? How does a genocide begin? The panelists had equally sharp answers: Some memory is better than none. Silence can’t provoke a discussion, and without the discussion, nothing can get done. “That happened in the past” is often a dodge to avoid naming names.

Shedlo was extremely pleased with the outcome of the evening. “When I encountered the concept of transitional justice in Dr. Bickford’s course,” she observed, “I was so intrigued by the opportunities it presented to engage with history, psychology, and the law in the advancement of human rights. Given the range of faculty expertise and perspectives on this topic across YU schools, I was delighted to have the chance to convene this panel to bring those insights to our students, many of whom had limited knowledge of transitional justice. It was especially gratifying to see the students’ enthusiasm and curiosity as they asked many thoughtful questions and stayed behind afterward to meet the panelists. In tandem with YU programs, such as “Names, Not Numbers” courses and a new student-run Genocide Awareness club, I look forward to continuing the conversation!”