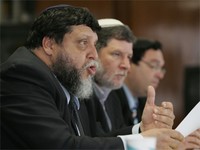 Jun 1, 2006 — “A few months ago, if someone had asked me to name five rabbis in the United States, I could not have done it,” says Rabbi Rafael Feuerstein, chairman of Tzohar, the largest organization of religious Zionist rabbis in Israel.

Founded to repair the divide between secular and observant Israelis, Tzohar is partnering with Yeshiva University’s Center for the Jewish Future (CJF) to create an international dialogue among Jewish leaders, hoping to form a concerted, strategic movement to address key issues facing the world Jewish community.

“The ultimate goal of the roundtables, and the organizations that participated in them, was to expose the Israeli rabbis to various segments of community in the Diaspora and to acquaint them with institutions that can help them create a more effective rabbinate in the communities they serve,” said Rabbi Brander, dean of CJF. “The rabbis of Tzohar seek to mend the gaps in Israeli society resulting from events beginning with the murder of Prime Minister Rabin, z”l to the chasm created in Israeli society after disengagement.”

The challenges that face American and Israeli Jews as they work toward this goal are largely the same, but the causes are sometimes different, the discussions revealed. For example, enriching the relationship between rabbis and their synagogues is a primary concern of both groups. Tzohar, however, is also committed to reaching out to secular Israelis by bringing Torah and Jewish traditions to them and focusing on matters of concern to the entire Israeli population.

Israeli rabbis are paid by the government and work regular jobs in addition to their religious duties, which makes their relationships to their congregants relatively distant. In order to make the synagogue the heart of the community, Tzohar maintains, the rabbi must learn to be more than just an expert on Jewish law, but a psychologist, social worker, and community organizer as well.

Rabbis in the US are accustomed to serving these many roles, and over Shabbat, the Tzohar group split up to observe Orthodox communities in action at synagogues in Florida, Cleveland, Long Island and the Upper West Side of
Manhattan.