How do you fight virulent anti-Semitism?

It’s a question Jews have grappled with for eons, but, according to Abraham H. Foxman, national director of the Anti-Defamation League since 1987, it’s taken on new significance in the Internet era. At Yeshiva University’s Hillel Rogoff Annual Memorial Lecture on April 2, Foxman outlined the many ways modern technology and politics are reshaping the age-old battle against hate speech and discrimination in America and around the world.

“It’s a sea change in the areas of bigotry and prejudice,” he said. “We’ve lost the ability to ignore issues we’ve been silent on historically because if it gets on the Internet, it gets picked up by blogger and sent to thousands of people. We’ve lost the ability to be nuanced and subtle, because people aren’t reading what you say. What is still in your control is the manner and level of your response.”

Titled “Reflections on Current Events: Anti-Semitism in 2014,” Foxman’s talk on the Israel Henry Beren Campus touched on everything from his childhood as a Holocaust survivor to recent anti-Semitic attacks on Jews in Europe. When asked by a member of the audience if a tragedy on scale with the Holocaust could happen again, Foxman noted that his book, Never Again? The Threat of the New Anti-Semitism (HarperOne, 2004), had a question mark—and not an exclamation point—in its title. “I don’t think any survivor will tell you it can’t,” he said. “People used to say that in today’s open world, everyone knows everything. But look around you. Look at Syria. They say there might be 250,000 dead. Everybody knows and everybody has excuses.”

He added that anti-Semitism is on the rise globally, according to a forthcoming survey of 100 countries from the ADL. “Anti-Semitism today is worse than it’s been since World War II,” Foxman said. “It’s not the same as it was during or immediately after, but the legitimacy, openness and brazenness of it is growing.” Still, he never feels he’s fighting a lost cause. “I still believe there are more good people in the world that ugly, hateful or evil people,” Foxman said. “I’ve seen the ability to educate, inspire, and change people’s minds and hearts. I’ve learned that, during the Shoah and throughout our history, wherever, whenever and however good people said, ‘No,’ Jews lived. My job is to find out what it is that made those people say no—that’s the answer to the next Holocaust.”

In America, Foxman pointed out, great strides have been made in the last century. “Jews today in America can live where they want and study what they want,” he said. “I can see the changes in this country.” According to Foxman, the challenges of the next generation will include building bridges between the Jewish community and the fastest-growing demographic in the United States: the Latino-American community. “We’re working with the leadership of the Hispanic community over time,” he said. “I take six missions of Hispanics to Israel every year so they can understand our culture, our history and our closeness to our faith and land. I could take 60. We need to invest in these relationships.”

However, Foxman felt the greatest challenge of the modern arena is the one the ADL is battling now: the dangerous anonymity of online hate-mongering. “How do you deal with hate so overwhelming, never-ending and inerasable?” he said. “It travels in nanoseconds and it’s protected by anonymity. We’re struggling between the First Amendment and protecting civility.” 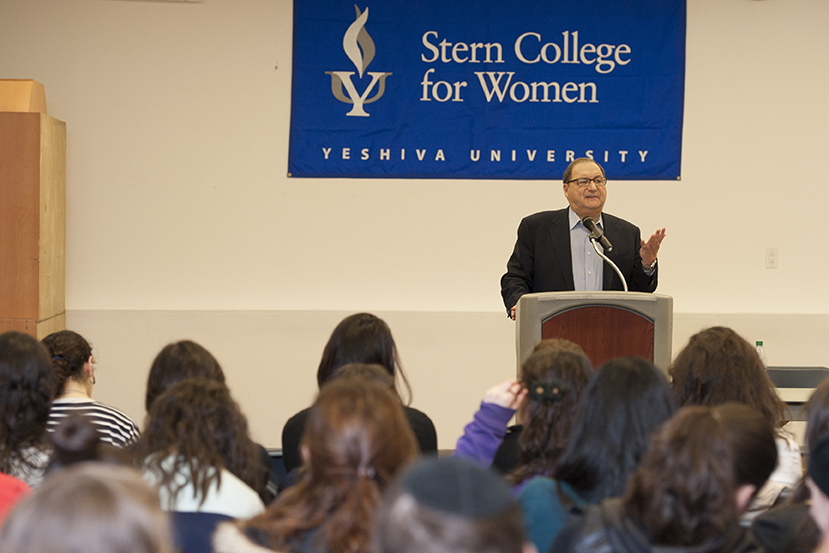 Recalling the 1954 case in which the ADL succeeded in passing a law in the State of Georgia that prohibited members of the Ku Klux Klan from wearing masks, Foxman said, “It was probably the most important single act to begin to undo the Klan, because all these heroes who were politicians and good churchgoing men during the day—their identities were revealed and it began to change the impact of the Klan.” He added, “Now, 50 years later, the Internet has put the mask back on the bigot. That’s what we have to fight.”

That last point especially struck Stern College for Women sophomore Eleorah Sandman deeply. “The problem is so much bigger than it seems on the surface,” she said. “People read and believe and have no idea how to filter what’s legitimate.”

For Huvie Weinreich, a junior at Stern College, Foxman’s dedication was inspiring. “It’s necessary for our community to fight anti-Semitism, because it tells the world we won’t just lie down and take it,” she said. “If we have something worth having, it’s worth fighting for.”

The lecture is named for Hillel (Harry) Rogoff, an early alumnus of YU and longtime editor the Jewish Daily Forward. It was established in 1971 through the efforts of the late YU English professor and administrator Dr. David Mirsky and members of the Rogoff family.