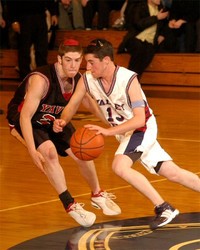 Todd Nathan, a previously unheralded guard for the Bulldogs, led all scorers with 19 points, but the game was dominated by Wolfpack members Simon Brookim (15 points) and Daniel Rosenberg (13 points). After lighting up the scoreboard in the first half with 17 points, Nathan was held to only two points in the second. As Nathan went, so did the Bulldogs, who led by as many as eight in the first half but saw their lead disappear in the second.