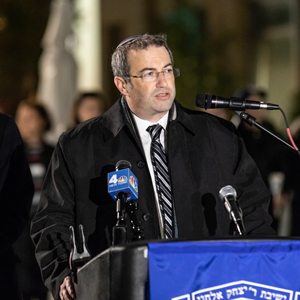 In response to the horrific events at Pittsburgh’s Tree of Life Synagogue, where 11 people were brutally murdered during the Shabbat morning services, student leaders from both the Beren and Wilf campuses organized a community vigil this past Sunday evening. Dr. Ari Berman, President of Yeshiva University, joined local community leaders and over 150 students, faculty and community members on the Wilf campus to mourn together and seek comfort.

“We were all stunned and grieved when we heard the news yesterday,” said Dr. Berman. “We stand tonight in mourning over the loss of our brothers and sisters in Pittsburgh, and we join in prayer for the full recovery of those in the congregation who were injured. The rabbis teach us that the Jewish people are like one body and when one side is cut, we are all in pain.” 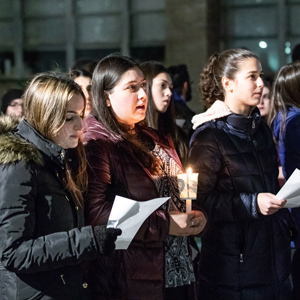 The program began with community song, followed by words of inspiration and support from student leaders and both local and national government officials. Nolan Edmonson, Yeshiva Student Union president, noted that while evil was done in Pittsburgh, “we also glimpsed the true meaning of brotherhood and the service and charity that so many Americans—Jewish and non-Jewish—showed to this one small community in Pennsylvania.”

Congressman Espaillat stated that “this circle that we have formed here tonight… speaks much louder than any voice of hate, effort of bigotry, or attempt to inflict pain through anti-Semitism.” Jackson declared that “I stand here tonight to say no to hate and yes to love and understanding,” a point seconded by Assemblywoman Carmen De La Rosa, who said that people cannot “be silent in the face of hate… [we need] to always speak with our love and with our unity as a community.”

NYC Councilman Ydanis Rodriguez apologized to young people “because we, as adults, have not been able to eradicate hate, and now it is up to you to continue building a society of love,” while NYC Councilman Mark Levine put out a call “to come together again to fight this as Jews, Latinos, African Americans, Asians, LGBT, immigrants and native-born, Christians, Muslims, Hindus.” 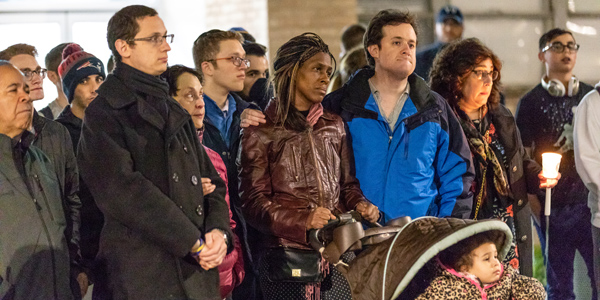 Other University units have also been involved in responding to the situation. The Center for the Jewish Future has been working closely with local rabbis across the country to help them address concerns raised by the tragic events in Pittsburgh. The leadership at the Wurzweiler School of Social Work and the Azrieli Graduate School of Jewish Education and Administration have been working closely with educators and community leaders to offer support, while the Yeshiva University Counseling Center is offering emotional support to students on campus who may come from Pittsburgh and know the victims or their families.