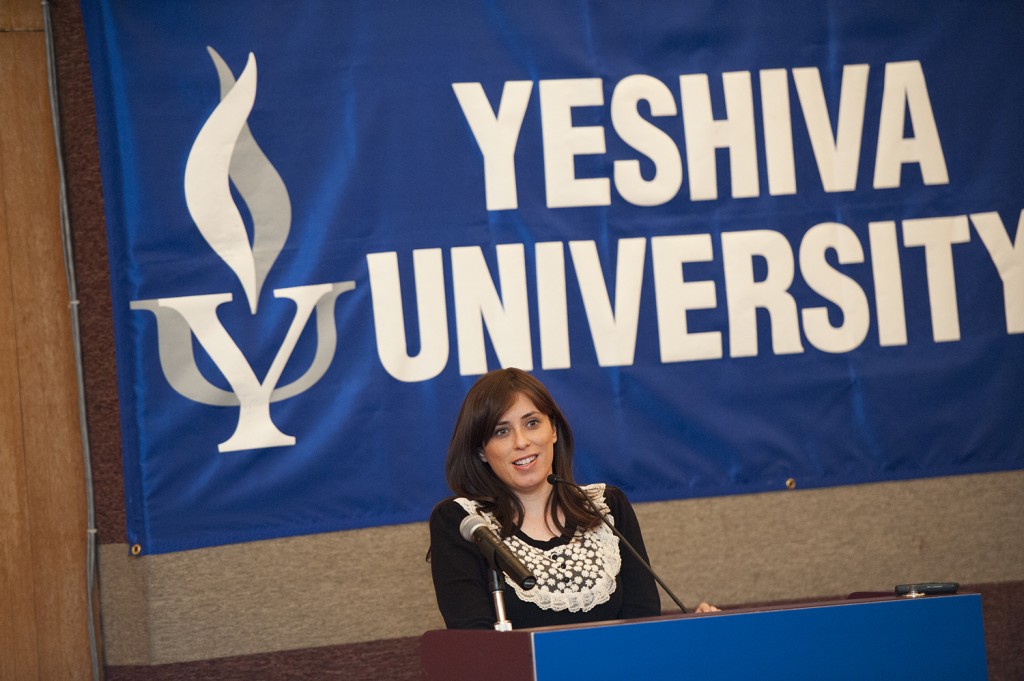 On December 19, Deputy Minister of Transportation and Road Safety Knesset Member Tzipi Hotovely joined Yeshiva University students on the Wilf Campus for a frank discussion about one of the most challenging issues facing Israel today: Israel’s identity as a Jewish state.

“People are saying, ‘We want to have a Jewish state,’ but they can’t tell you what that means,” Hotovely said. “What we need today more than ever is to have our own vision as a Jewish state, with a clear message.”

Hotovely’s discussion ranged from the recent controversial proposal to draft haredim [ultra-Orthodox Jews] for the Israel Defense Force to her own journey into politics from the realms of law and then journalism. She recalled how, at 26, she regularly participated in a political television show where she was frequently pitted against other Israeli journalists, most of whom were older, secular men to the left side of the political spectrum. It was on that show that she initially caught the eye of soon-to-be Prime Minister Benjamin Netanyahu, who later recruited Hotovely for his party in the Knesset. “When he offered me a position, he said something which I carry with me to this day: ‘There are many good politicians, but I don’t hear many people speaking for values. I want you to speak up for values.’ ”

Hotovely added that she felt YU was the perfect place to speak about exactly that. “I see you all as good ambassadors of understanding the new level of Zionism we need to build,” she said. “It’s easy to fight about the right of Israel to exist. I think what we’re missing is the discussion all of you sitting here can build with the people of Israel together, and that is how we’re all going to be part of Israel’s society and identity.”

The event was organized by the YU Israel Club and sponsored by the Torah Activities Council and Yeshiva Student Union. Hotovely was the third MK to address YU students in the last month. Previously, MK Rabbi Shai Piron and MK Naftali Bennett also visited.

“Her experience as a Knesset member, hearing about Israeli society from the perspective of a lawmaker, helps establish a more intimate connection for us with Israel,” said Gaby Elkaim, ’14SB.

“I think it’s interesting that we get to hear from so many different members of Knesset and they’re so different from each other,” said Naomi Schwartz, ’14S. “Instead of just reading their names in the newspaper, we get to hear what they have to say firsthand.”