On Oct. 7, 2019, Dr. Ori Aronson, associate professor of law and deputy director of the Center for Jewish and Democratic Law at Bar-Ilan University, discussed the significance and challenges of Israeli constitutionalism in “Interpreting Israel’s Nationality Law,” hosted by the Israeli Supreme Court Project of the Benjamin N. Cardozo School of Law. 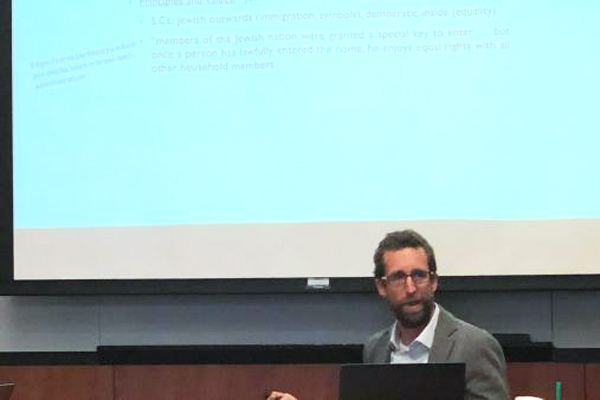 Dr. Aronson started with a brief history of Israel’s nationality law and the ethical and theological significance of interpreting it in the modern day and posed the question: “What does it mean for Israeli law?”

He then analyzed Israeli constitutionalism through the lens of human dignity and liberty. He delved into the “past-present-future” theme of the document while examining the presence of Jewish and democratic values. He also noted multiple interpretive challenges, such as the rephrasing of existing laws and novel provisions. “For any constitutional scholar, this is a really fascinating text,” he noted.

Dr. Aronson also considered what it means for Israel to be a nation-state for the Jewish people. He noted how the document adds to the secular understanding of “Jewishness,” noting that “the word ‘religious’ was added very late in the game.”

He also pointed out the use of the Arabic language and how it recognizes both Arabic and Hebrew as official languages. Aronson framed the constitution as an interpretation of the state of Israeli people and recognizing Jews as a minority. He also discussed how fragile the document was and how quickly the interpretations can change with time. “It’s not that we don’t trust our future politicians, we don’t trust the future itself,” he said.