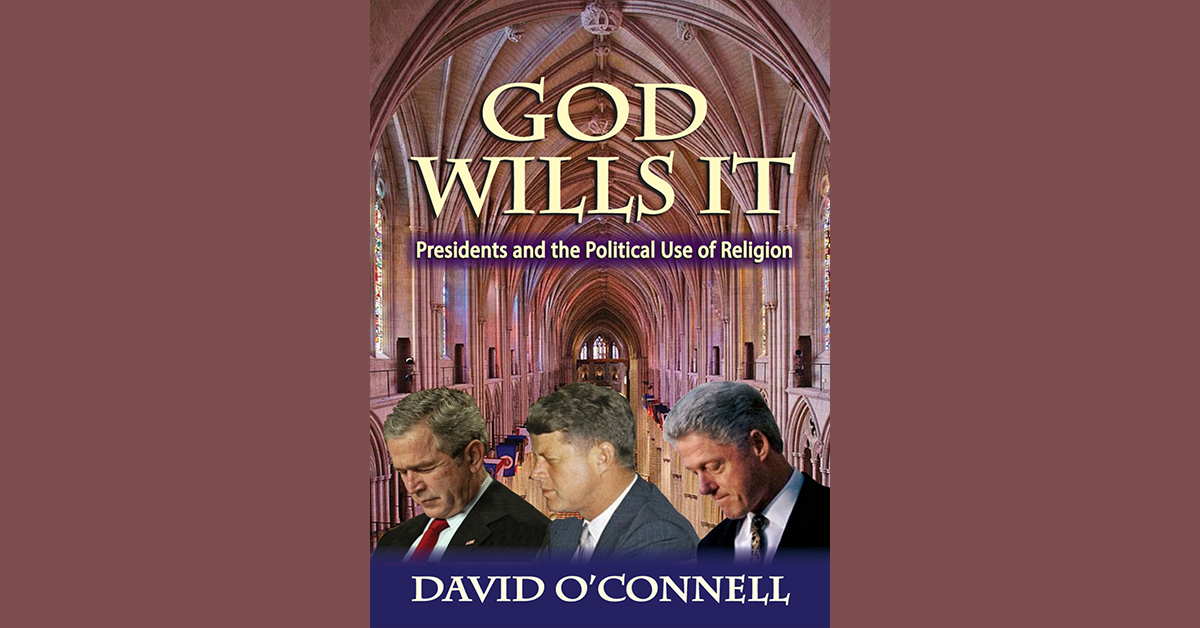 In God Wills It: Presidents and the Political Use of Religion, political scientist David O’Connell wrestles with the effectiveness of religious rhetoric during the modern presidency. Distinguishing between “communitarian religious rhetoric,” i.e., non-descript spiritual language meant to unify, and “coalitional” rhetoric meant to achieve a strategic goal or bolster a partisan position, he concentrates his study on the latter. And he is, to put it lightly, not a fan of it.

As O’Connell writes, “religious rhetoric is not helpful to a goal-oriented president. Consistently, public opinion does not respond to the president’s religious pleas, the media reacts critically to his ideas and language, and the reception of his proposals in Congress disappoints.”

The author bolsters his case through historical and even experimental means. In the realm of foreign policy, O’Connell argues, based on polling and op-ed reactions to religious rhetoric in President Eisenhower’s speeches on increasing spending on foreign aid and mutual security, his spiritual efforts did not bear fruit. Congress cut the funding instead of increasing it. Ronald Reagan also attempted to infuse the case for defensive spending. In remarks to the Young Leadership Conference of the United Jewish Appeal in 1984, he said:

“Perhaps you remember the 29th Psalm in which King David said, ‘The Lord will give strength to His people; the Lord will bless His people with peace.’ Well, today America once again recognizes that peace and strength are inseparable… Make no mistake: if we heed those who would cripple America’s rebuilding program, we will undermine our own security and the security of our closest friends, like Israel, and I am not prepared to make that happen.”

Alas, the press would have none of it. Reagan was criticized for trying to, as one op-ed put it, “justify the military position as being morally correct.” While Reagan’s initial years did see an increase in defense spending, despite the repeated use of spiritual language in his arguments, his second term saw Congress ensure that spending declined.

In the chapter titled “Holy Warriors,” O’Connell shows how, even during military campaigns, religion from the White House hinders the cause. Both George H. W. Bush and George W. Bush used religious rhetoric to make the case for war, with the latter framing the immediate aftermath of 9/11 as a battle of “good vs. evil”—a dichotomy which was initially popular but wore thin as the war in Iraq lost momentum and domestic support. “If religious rhetoric cannot help war-time presidents like both Bushes,” O’Connell wonders, “when can it help any president?”

Other examples God Wills It documents include Jimmy Carter’s attempts at addressing the energy crisis, Gerald Ford’s pardon of Richard Nixon (framed, in one speech, as being in the spirit of Rosh HaShanah), and Bill Clinton’s affair with Monica Lewinsky. Garbed in religious rhetoric, each was ill-received in the press, in public, and in Congress. The one exception O’Connell concedes is Lyndon Johnson’s usage of spiritual themes in arguing for civil rights. But, O’Connell argues, America was in a “honeymoon period” rallying around the new president after JFK’s assassination, and “there is little reason to suspect that in another universe, where religious arguments were not made, the result would have been any different.”

At the end of his study, after having conducted an experiment with Columbia University students that also showed that religious rhetoric in coalitional contexts is not persuasive, the author concedes the obvious—partially. He notes that previous presidents, most prominently Abraham Lincoln, used religious language to heal and unify. George Washington did the same (though O’Connell doesn’t mention it), and the vast majority of American presidents cite the Bible in the inaugural address, which O’Connell only passingly alludes to. He notes that as Americans have become more secular, “the force of religious rhetoric becomes weaker over time.” To paraphrase Lincoln, if Americans don’t read from the same Bible or pray to the same God, why bother invoking it or Him?

In his conclusion, O’Connell notes (in what seems not to be a lament but rather something to celebrate), “the language of religion is slipping from our grasp. Religious rhetoric is the political language of our past, not our future.” Strangely, the author admits in the book’s closing page that he should have titled his book God Doesn’t Will It.

Alas, what O’Connell neglects to acknowledge is, beyond having cooked up a theoretical framework knowing his conclusions in advance while bracketing aside exceptions to his thesis, is any concern with what can emerge as a replacement for the previously religiously tinged unifying national narrative. Recent years (God Wills It was published in 2014) have seen all manners of fervent political partisanship and social activism take hold in the space of American minds previously occupied by conventional faith. From cycling marketed as soul-nourishing to demands for forgiveness for historical sins, is America better off with leaders who turn the national conversation farther from God, faith, and tradition? That question, it seems, will be left to future presidents and the public to determine.