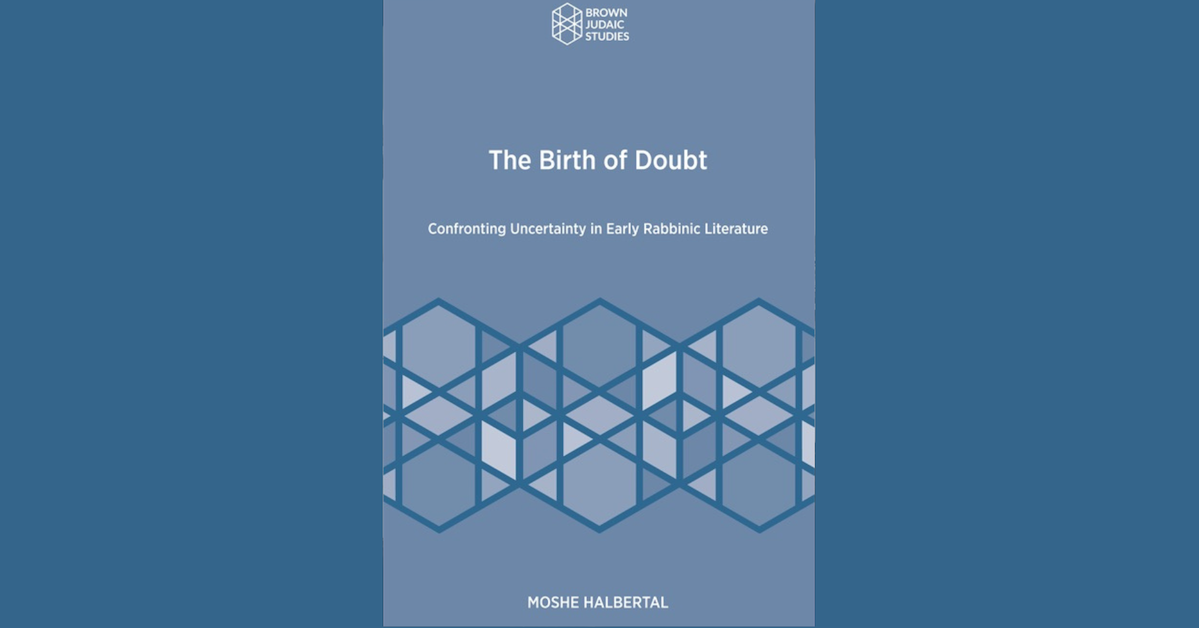 In The Birth of Doubt: Confronting Uncertainty in Early Rabbinic Literature, Moshe Halbertal uncovers and unpacks the innovative nature of the rabbinic focus on legal doubt, or safek. As Halbertal, a professor at both NYU’s law school and Hebrew University’s philosophy department, documents, the Bible only dabbles in the concept of doubt with what he calls “ad hoc” examples, including the rituals related to sotah (a woman suspected of adultery) and eglah arufah (an unsolved murder case). Yet in the Mishnah, Tosefta and Talmud, the degrees of doubt are substantively articulated and analyzed.

Surveying concepts such as the kosher status of food found in a public place, purity, possession of property, Shabbat start times, lineage of a mamzer (bastard), and gender identity, Halbertal shows how the rabbis were quite comfortable wrestling with doubt’s very nature. Noting numerous times throughout his study that the Apocrypha, Dead Sea Scrolls, Philo, and Josephus did not delve deeply into uncertain legal states, Halbertal presents the innovative nature of the rabbi’s thinking. Instead of simply deciding that, say, food found in a public square was not kosher, they codified that if the majority of citizens were Jewish, the food could be presumed kosher, a decision that Halbertal calls both “astonishing” and “far-reaching” in light of its cultural and literary milieu. They created the legal concept of “bein ha-shemashot” (twilight), which impacts when Shabbat starts, despite there being no pre-rabbinic precedent for the concept, an interpretive move that Halbertal deems “truly a halakhic scandal.”

As Halbertal details, much discussion of doubt reflects the rabbinic legal system’s perceptions of values and the weight ascribed to them. The concern for saving even one life allows for the violation of Shabbat if there is even a chance that someone’s death could be prevented. (As the author helpfully notes, there is no view in all of tannaitic literature that challenges this ruling.) Avoiding social exclusion of potentially impure individuals while not being paralyzed by concerns over uncertainty, the rabbis strike a healthy balance that “allow[s] a certain degree of contact with a complex reality that generates doubt and misgivings.” Concepts like chazakah (presumption), for example, establish “halakhic anchors,” limiting doubt from becoming an ever-creeping obsessive concern. Even when faced with differing perspectives on issues pertaining to marriage, as the houses of Hillel and Shammai were, the rabbis found ways to share both the beit midrash and the canopy, as the Talmud details.

The initial development of the legal nuances and degrees of doubt has, of course, flourished in subsequent Jewish tradition, including in later works Takfo Kohen by Rabbi Shabbetai Kohen and the Shev Shemateta by Rabbi Aryeh Leib Heller-Kahane. As Halbertal concludes, “the twilight zone of doubt and uncertainty proved to be fertile soil for the construction of a world alongside the real world.”