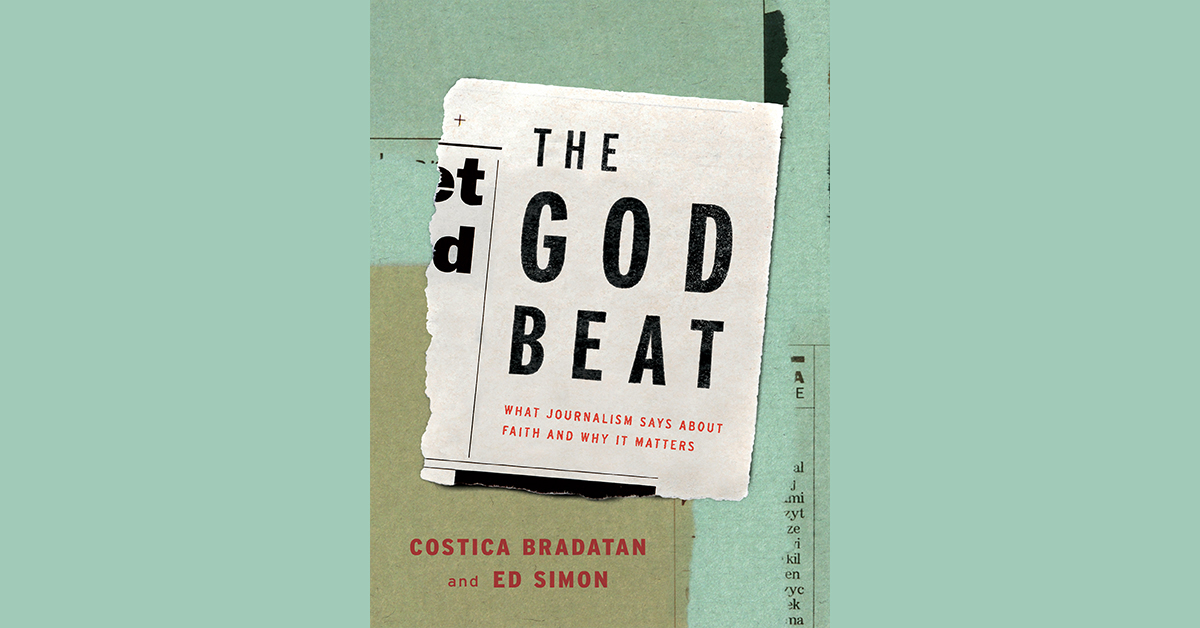 The God Beat: What Journalism Says about Faith and Why It Matters collects some of the best recent articles about religion in America. Edited by Costica Bradatan, religion editor for the LA Review of Books, and Ed Simon, a staff writer for The Millions, the volume contains a diverse array of essays previously published in outlets such as The Atlantic, Religion Dispatches, Aeon, LA Review of Books, and Tablet.

The contributions are organized into four themes—experience and identity, politics and society, science and technology, and theology and philosophy. At times informative, inspiring, horrifying, personal, tragic, and frustrating, the editors admit in their introduction that their collection “is neither exhaustive nor very systematic.” The volume aims to showcase “New Religion Journalism,” which, as Simon describes, involves the writer inserting themselves into the story, with a particular focus on displaying “the full ambiguity and ambivalence of belief” and questioning “the theism/atheism binary.”

Not unexpectedly, then, the reader is left without any sensitive descriptions of the everyday faith, rituals, communal practices, observances, and religious celebrations that constitute the typical religious experiences of most lived practitioners of faith. (There are two nuanced and sensitively depicted portrayals of Jewish observance in essays about the care taken to bury the corpses of the Jews killed in the Tree of Life massacre). Instead of articles that on the whole argue for religion as a spiritually, psychologically, communally, or even physically edifying force (all of which it is for billions), one meets a motley crew of cultists, abusive priests, #MeToo victims wrestling with forgiveness, Scientology escapees, opioid users, and Christians upset at other Christians for voting for Donald Trump (as well as a head-scratching reference in an essay about early Christianity that refers to Jesus as having lived in “occupied Palestine”).

That is not to say that the essays aren’t well-argued or adeptly composed. Rather, it is not clear what they have to do with each other, nor why collectively they should, as the title suggests, matter more than if they were read in their original form as individual essays on websites.

Still, The God Beat contains several masterpieces on a host of fascinating characters. Marcus Rediker’s contribution, “The Forgotten Prophet,” tells the tale of a diminutive (under four-foot-tall) Quaker named Benjamin Lay whose passionate and dramatic religiously-motivated calls for abolition in the early 18th century went unheeded by his coreligionists. Emma Green’s piece from The Atlantic on Eric Lidji, the archivist of Pittsburgh’s Jewish community upon whose shoulders were thrust the responsibility for preserving the history of the worst antisemitic shooting in U.S. history, and Shira Telushkin’s profile of the chevra kadisha members’ selfless service in collecting the remains of the victims are both heartbreakingly and passionately rendered.

Readers of The God Beat will learn of Amma, a Hindu guru mother-figure who has hugged over 26 million people across the world, peer inside the psyches of Catholics whose souls were crushed by the news of abusive priests, and be challenged to wrestle with an Indian historian’s argument against calls for “Muslim unity.” Through assembling essays on an eclectic range of internal, political, and, of course, religious “disjunctions” relating to faith, the editors have produced a volume that shows people of faith at their worst and at their best, at their lowest point of devastation and at their most uplifted. Whether or not the practice of faith ends up mattering, the book makes clear, remains less in what you read about in the papers, and more in the actions of the believer.