Devotees of the Harry Potter books and the fantasy genre in general may not know that there is a Judaic angle on the boy wizard, the Muggle world and a Hogwarts education courtesy of Rabbi Moshe Rosenberg, who attended the Marsha Stern Talmudical Academy/Yeshiva University High School for Boys (1978) and Yeshiva College (1982) and earned semicha [rabbinic ordination] at the Rabbi Isaac Elchanan Theological Seminary (1985).

His first three books—The (Unofficial) Muggle Megillah, The (Unofficial) Hogwarts Haggadah and Morality for Muggles—all available on Amazon—take as their starting point the core tale of the Potter books of a young orphan who, while dealing with identity and loss, is forced to fight powerful ancient enemies and save his entire people. The echoes of that tale in the Book of Esther are unmistakable, and Rabbi Rosenberg uses the intersections of the two stories to explore Jewish values and insights.

His most recent book, The Superhero Haggadah: A Story of Signs and Marvels, takes a different but also similar journey through the overlapping worlds of Judaic studies and popular culture. He explores the 23 Infinity Saga films of the Marvel Cinematic Universe and reveals uncanny connections to the classic Passover story: From time travel to teaching, internal demons to external enemies, exile to homecoming, and Talmudic sages to cinematic superheroes.

YU News had the chance to have a virtual sit-down with Rabbi Rosenberg and talk about magic, religion, what prompted him to write these books (a round of cancer played a large part) and what might be our own super powers.

The interview has been edited for clarity and concision.

Let’s begin with a little biography. Where did you grow up and what was your family and early education like?

I lived on the Upper East Side of Manhattan, connected to Congregation Kehilath Jeshurun (well-taken care of by the Rabbis Lookstein). My father came to America through Japan and Shanghai with the Lubaviticher Yeshiva as a beneficiary of a Sugihara visa. He was the ritual director of KJ for 36 years. My mother was the daughter of the Mikvah attendant of an Orthodox shul in Corona (please pardon the word!), Queens.

In our home, it was a given that we would attend Yeshiva University. My brother, Abe (7 years older), preceded me. I never heard of another possibility.

How would you describe your time at YU in general?

Extremely positive. I was an English major and remember very fondly Dr. Taubes, Dr. Fleisher, Dr. Haahr, and Dr. Weidhorn, among others. My Rabbeim were Rabbi Bronspiegel, Rabbi Schachter (5 years plus 2 summers at Tannersville), and the Rav. I was fortunate to also experience the Torah of Rabbi Alpert and Rabbi Parnes. Experiencing Rabbi Carmy and Dr. Brayer taught me a new depth in Tanakh. And just watching Rav Dovid Lifshitz or Rabbi Yitzchok Cohen daven Ma’ariv was spiritually formative. As a longtime student of Rav Schachter, I had the chance to accompany him to many of the shiurim he gave around the city, the state, and the world. See my article about him in the Commentator celebrating his 50 years.

My writing career was forged in many ways. Most important was Dr. Paul Connolly’s creative writing course. I remember how once, as an exercise in inventing characters, Dr. Connolly had us choose a name for a character—I still remember the name I chose (to his approval) for an elderly spinster: Bertha Winsome.

Winning the Jerome Robbins Short Story contest helped me see myself as publishable. Where else could I learn nusach and fencing, alongside Talmud and the Development of the English Novel but at YU?

In what way(s) did your YU experience influence the choices you made in your life?

The most obvious way is Torah UMadda. At the core of Yeshiva’s philosophy is that Torah and culture, even popular culture, can shed light on each other. I benefited from the trailblazing work of Rabbi Lamm, Rav Lichtenstein and Rabbi Michael Hecht (who was my Rebbi, my American Government and Constitutional Law professor, and my Dean—but that’s another story for another time) and I dedicated my (Unofficial) Muggle Megillah to them for doing what I try to do but “so much more majestically.”

What is the origin story of this project? In other words, what prompted you and your collaborators to create these books?

Early on I discovered that my students were enthralled by the Harry Potter books—and for good reason. One of the people who introduced me to Harry Potter was Penny Joel, daughter of former YU President Richard Joel, who was my assistant at SAR Academy in Riverdale. I discovered that Harry Potter evenings, clubs and references could drive home the lessons I wanted to teach in Torah in a way that was appealing to my students. It was great fun. And it was chinuch [Jewish education]. What better way to show them that Torah can connect to their lives and everything they watched and read?

How did your experiences at YU shape this project (if at all)?

Certainly Torah Umadda, but, even more importantly, YU took my love of words and fanned it into flame.

Your new book is out: The Superhero Haggadah. The source of this book seems grounded in your own personal experiences of illness and recovery. How did the writing of the book help transform you and the way you see the world?

Actually, as I write in the introduction, it was the other way around: while going through cancer treatment, when I could do little more than watch movies, my children tried to distract me by watching superhero movies with me and the experience taught me that a genre of film that I’d never credited with educational potential could actually contain ideas that could be used in teaching and writing on religious topics. 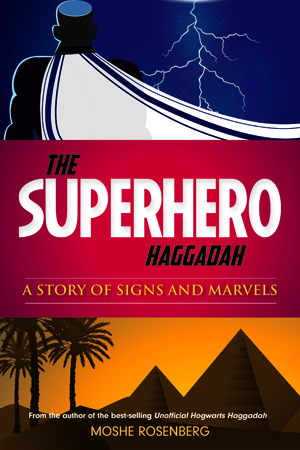 What has been the response to your body of work?

Extremely gratifying. The (Unofficial) Hogwarts Haggadah reached #11 on the overall Amazon bestseller list and was internationally acclaimed. It even drew a tweet from Chelsea Clinton, whose book was #12 at the time!

How has your family helped you with this writing project?

One of the best parts about writing these books has been how they have been family projects.

My brother, Abe Rosenberg (’73YUHS, ’77YC), who lives in Los Angeles, was a newswriter for three decades and won Emmy Awards on both coasts. He is my model for simple, moving prose.

My children know at least as much about Harry Potter and superheroes as I do, very likely more. They have all been involved in their own ways. Most prominently, Yair, who is a Senior Writer for Tablet, and Sarah Meira, who does programming and communications at the Spanish and Portuguese Synagogue, became my editors and publicists. They are responsible for my slipshod prose looking professional and for anyone at all having heard of me. Without them, I’d be like all the other self-publishing schnooks.

Finally, my words would have little effect without the genius and artistry of the remarkably talented Aviva Presby Shur, who lives with her family in Israel. She did the design of the Haggadah and Megillah and now the Superhero Haggadah. On one visit to LA, I came across a beautiful piece of literature in a shul. It was designed by Rob Shur, whom I knew from his work at YU. I contacted him to see if he would be interested in designing The (Unofficial) Hogwarts Haggadah. He said, “That’s more up my wife’s alley.”

And the rest is history.

A special feature this time is a set of drawings by Moriel Hirsch-Hoffman, a former student of mine who is only in 7th grade, but has been drawing superheroes for years. I take great delight that through this project he discovered that following his passion can also open vistas for profitable endeavors. 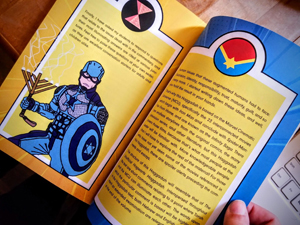 Any other works in the offing?

When I was diagnosed with cancer, I searched for a book that would tell me, no holds barred, what it’s like to be a Rabbi and go through the treatments and surgery while trying to lead my congregation. As far as I know, that book has not yet been written. I’m trying to write it.

And when you’re not writing?

Aside from spousing (I hope to be the plus-1 of my wife, Dina Meyer Rosenberg, in the World to Come), parenting, teaching, Rabbinating and writing, I enjoy designing games, educational technology, science fiction, and remembering how good I used to be at sports.

And finding your superpowers…

And, yes, finding my superpowers!