On Wednesday, October 31, Kol Hamevaser (which bills itself as “the Jewish thought magazine of the Yeshiva University student body”) and the Yeshiva University Feminists Club hosted an event titled “Where Have All the Women Gone?” The speaker, Shoshanna Keats Jaskoll, who raises awareness for many issues including child sex abuse, women’s health and the Israel-Arab conflict, is a leading voice against the increasing phenomenon of erasing Jewish women. On her website, she describes herself as as a “warrior with a pen.”

As she entered the room, Keats Jaskoll announced that she would be crying before the night was over because, as a resident of Beit Shemesh, a city west of Jerusalem, the results of the election for mayor were moments away from being released. As soon as the words left her lips, it was announced that newcomer Aliza Bloch had unseated the incumbent, Moshe Abutbul. She began to tear up and asked the room, “Is there a bracha [benediction] for this?” A few voices uttered back shehecheyanu [blessing], and in a wavering but joyous voice, Keats Jaskoll recited the shehecheyanu bracha, and on her final word, the room erupted into amens and applause.

She explained that her reaction comes from her personal history. When she first moved to Beit Shemesh, she realized something was wrong. “I didn’t really notice until I noticed: women and girls were disappearing. Not from the streets but from pictures and publications.” She showed numerous photos in magazines and advertisements where women were blurred out or totally removed.

She also noticed that signs were going up around the neighborhood dictating a strict dress code for women and girls. “The signs are illegal,” she noted. “You can’t do that in Israel. You can’t tell people how to dress in a public space.” But despite the illegality, nothing was done to stop the signs going up until the women in Beit Shemesh went to the Supreme Court to sue the city, a case that they won. 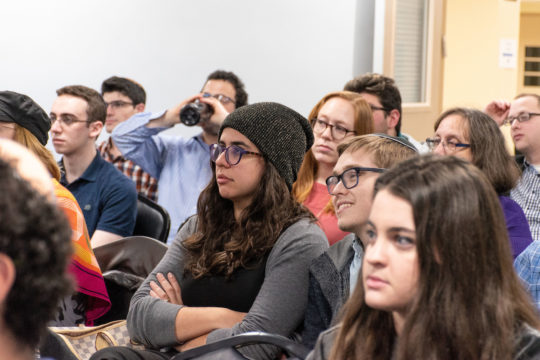 “You know what happened?” she asked. “Nothing.” The women were attacked in the local newspaper, which Keats Jaskoll called the mouthpiece of the mayor, and they were also physically attacked, with women and girls being stoned, spat on, yelled at and more, none of it contested by the mayor.  “It was not about tzniut [modesty], it was about turf,” she stressed. “‘I don’t want you here, you don’t belong here, you’re not like me, you can’t be here, I am going to take the weakest link which are your women and girls and I’m going to attack that.’” The result of this attitude was that “women weren’t being seen, women weren’t being heard in the beit din [rabbinical court],  women weren’t involved in the policies that were being made in the beit din or in the religious communities.”

This is why the results of the election are such an important milestone for her town and Jewish women. “I want you to understand that the people of Beit Shemesh are taking their town back. This is the answer to everything I am telling you tonight about bullies and extremists and people who tell you you cannot be where they don’t want you to be: You come together, you fight a good fight, you work really hard for the right reasons, and you can do it. That’s why Beit Shemesh deserved better. Not because the mayor is Charedi, but because he didn’t take care of the city.”

Keats Jaskoll has done a lot of work connected to women’s health care, specifically breast cancer, about which many Charedi women have no knowledge, even to the point that some die without ever even being able to name the cancer. She has also done a lot of work in the beit din in regard to the agunah [chained wife] crisis because she feels women need to be more involved in the policies that involve women. “If you’re not part of making policy, then policy isn’t necessarily going to reflect your needs. This isn’t against men, but men are not women. And men don’t experience life the way women experience life, and they don’t experience Judaism the way women experience Judaism.”

She gave several more examples of how women are being erased, and why it is important to resist their disappearance. She showed an advertisement from Bank Hapoalim, where the bank promised to “be with you every step of the way”—as long as you were one of the three men displayed in the ad, “whether you’re a bochur [boy], when you have a kid on your own, and when you marry off your kid—on your own,” her sarcasm eliciting a lot of laughter from the audience.

She opened an IKEA catalog where “abba [father] does everything in IKEA. Abba cooks, abba cleans, abba does the homework.” In the entire Swedish furniture catalog, there was not a single woman in its pages. “Why is IKEA erasing women? Because they’re catering to the lowest common denominator. You want to sell furniture? You want to sell Oorah tickets? You want to sell day camps? Take out the women, and you’ll get more people.”

A student asked how can people show the Modern Orthodox communities that this is an important issue to care about.

“Erasing women is not halacha [according to Jewish law]. Not giving your wife a divorce is not halacha. Throwing rocks is not halacha. These issues are not halachic, and they’re not Judaism. The future I see for women in Judaism is awesome and it’s beautiful. If we care about a healthy Jewish society, one where our children stay frum [pious], we need to have women in the picture.”