In some ways, a recent meeting of “The Image and the Idea,” a new course offered at Yeshiva University’s Stern College for Women this fall, looked like many other art history classrooms across the country.

Projected on the whiteboard was “The Creation of Adam,” the classic fresco painting by Michelangelo that graces the ceiling of the Sistine Chapel. Dr. Jacob Wisse, associate professor of art history and director of the Yeshiva University Museum, discussed the religious and historical context of the painting, Michelangelo’s sculptural style and his goals as an artist. Then, pausing for comments, he took one—from Rabbi Dr. Meir Soloveichik, assistant professor of Judaic studies and director of the Zahava and Moshael Straus Center for Torah and Western Thought, sitting at a desk near the front of the room.

“Seeing Adam depicted here in the Grecian form seems almost the opposite of our biblical tradition,” Soloveichik observed. “In our texts, Man is made from ‘dust and earth.’ But if you see Man through this lens, the Fall from Heaven feels much more like a rebellion, whereas in Jewish tradition, we see it much more as succumbing to human frailty.”

“In the Sistine Chapel, you see that much more in the last scene on the ceiling, with the drunkenness of Noah—a dramatic depiction of human frailty from which there has to come a redemption,” Wisse replied.

The exchange was representative of the larger dialogue between art and Jewish philosophy taking place at the heart of this interdisciplinary course, which is co-taught by Wisse and Soloveichik. They take turns hosting class sessions that examine the subject matter—which can include image, paintings, sculptures, architecture or ritual objects in conjunction with readings from Jewish thought—from the alternating perspectives of art and Jewish philosophy, creating a unique class structure that allows students to see not only how the fields of study gain from each other, but how their professors benefit from each other’s knowledge, as well. 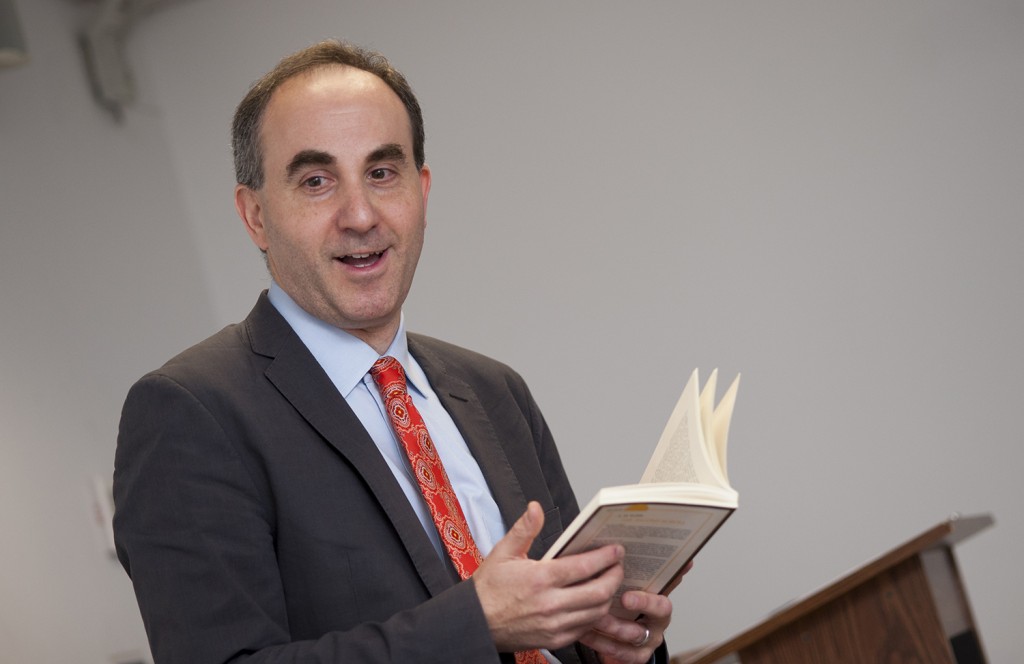 “A team-taught course is at its best when the faculty come at a subject from different directions but with equal intellectual vigor and passion,” said Dr. Karen Bacon, the Dr. Monique C. Katz Dean of Stern College. “Drs. Soloveichik and Wisse meet, and indeed exceed, these professorial criteria and are presenting our students with a uniquely Yeshiva University experience.”

“We’re not just teaching, we’re learning from each other and bringing the students into that process, which I think adds a real element of excitement to the class,” said Soloveichik.

The idea of bridging art and Judaism was originally suggested to Soloveichik by Moshael Straus, founder of the Straus Center, and “the course grew out of the interest we have in discussing things together, which to some degree has become the inspiration for the form of the class as well,” Wisse said. “We wanted it to be an integrated dialogue, not just a Jewish thought lecture and an art history lecture.”

“What may even be pioneering about this course is the way it creates conversation between two worlds,” added Soloveichik. “As someone who spent many years in yeshiva, I knew of models of integration of Judaism with other subjects: Jewish scientists, Jewish philosophers, even Jewish thinkers approaching literature. But this course is unlike any that might be taught at a university that doesn’t focus on this synthesis in general.”

The course began by addressing the juxtaposition of art and religion in general, with a particular focus on Judaism, before turning to specific mitzvot, drawing on essays as well as objects within the collections at the YU Museum to consider how beauty can enhance—or detract from—the proper approach to and appreciation of the means of fulfilling those mitzvot. That included a trip to the museum for a closer look at its new special exhibition, “Threshold to the Sacred: The Ark Door of Cairo’s Ben Ezra Synagogue,” which explores the artistic character and the religious, communal and cultural context of an object of great beauty and significance: the decorated and inscribed medieval wood door from the Holy Ark of Egypt’s Ben Ezra Synagogue, where the Cairo Genizah was discovered. 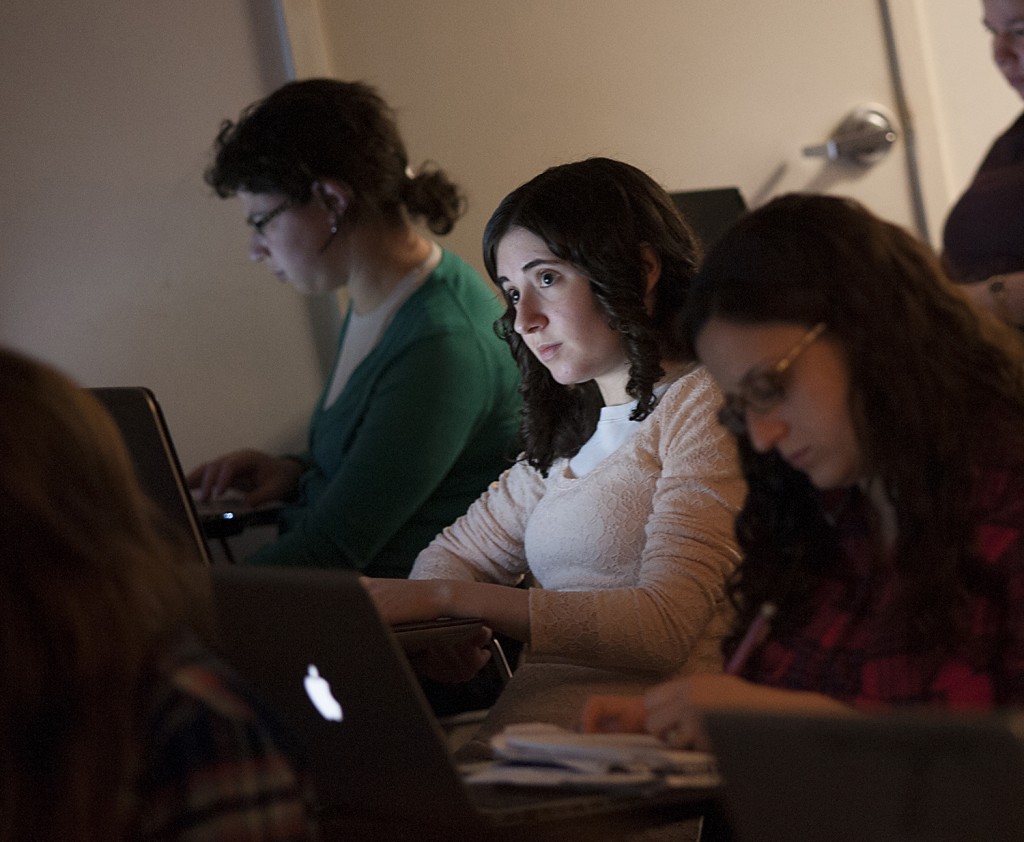 “It’s an object that expressed its importance—as the threshold to where the Torah scrolls were held—through beauty. But it was also something that faced the community, and how its beauty was defined was very much shaped by the broader context of a Jewish community in the Mediterranean living within an Islamic culture,” said Wisse.

“We’re discussing the tensions between ideas in Jewish thought and the actual objects of Jewish living and Jewish art,” Solovechik added. “What do objects utilized in Jewish rituals actually embody? Placing them within their social and historical contexts while linking them to uniquely Jewish ideas helps us gain a very rich understanding of what these objects are and what we’re looking at when we see them.”

The course benefits not only from its complementary pairing of faculty, but from the diversity of students enrolled in it, as well. “One of the most wonderful things about this course is that students who have taken an honors course in art with Jacob or an honors course in Jewish thought with me are now in conversation together, engaging each other,” Soloveichik said.

“We wanted students to feel that these various interests they have, whether personal, professional, familial or worldly, do speak to each other and shouldn’t exist in silos,” said Wisse. “To that end the discussion taking place in the class between these different majors has become a goal of the course in itself.”

For Victoria Chabot, a studio art and Judaic studies major, the course was essential. “We have looked at images ranging from the Pantheon to the Hagia Sofia and the imagery described in the Book of Psalms, as well as the image of the chupah [bridal canopy] and what it means in Judaism,” she said. “It has truly enhanced my life as a practicing Jew and made me more sensitive to the world around me.”

Chaya Kanarfogel, a speech pathology and Judaic studies major, was similarly moved. “Seeing the complex and appreciative way in which Judaism approaches art makes me proud of the fact that I am part of a religion that respects what the world has to offer,” she said.