All three members cited a desire to improve their surroundings as their impetus for getting involved in politics. “I noticed how much local politics was impacting people’s everyday lives, and that’s what got me to stay involved in my community as one of the youngest district leaders in Queens County,” said Espinal, who said she got involved in politics as early as the age of 13.

Rozic also began at a young age. “My parents instilled in me the notion of tikkun olam, repairing the world and leaving it a better place, and they certainly raised me with a fistful of chutzpah, which I hold onto to this day.” In college, Rozic began interning for as many offices as she could find; she became a chief of staff by her early 20s and was elected to the Assembly as the youngest women ever in that position in 2012.

After working in local government for a number of years, De La Rosa decided to work for Ydanis Rodriguez, her local city council member. “In that office, I learned how to advocate for my own community. I was no longer solving the issues of others, I was solving the issues of people who, like my parents, came to this country as immigrants and really dealt with the issues of poverty.”

The next question asked was in regard to the members’ experiences of being women in politics. All three had many similar experiences of feeling that the level of respect they received did not match what their male counterparts received.

“A lot of times, I get asked who I work for, and I say that I am a New York State Assembly member and that I work for my district,” said Espinal.  “One time I got asked if I was even old enough to vote for myself!” In January 2019, the elected seats once filled only by men in Espinal’s district will now be filled by women.

De La Rosa told a story about when a man came into her office to discuss an issue and “about halfway through the conversation, he said, ‘I really hope you can tell Assembly member De La Rosa everything we’ve talked about.’ I laughed, because I thought he was joking!” At the end of the conversation, he asked for a card, and when De La Rosa handed him her card, he said, “No, not the assemblywoman’s card, your card.” De La Rosa continued, “’I just gave you 30 minutes of this very crazy day. You didn’t Google who you were meeting with before you came to this meeting?’ and I just had this moment of calling him out and saying ‘I am the Assemblywoman.’” The man obviously was very embarrassed, but now they’ve managed to find a way to work well together.

Rozic recalls a day when all the Assembly members were taking a vote. Midway through the process, she excused herself to go to the restroom. When she tried to go back into the assembly, a guard stopped her. “He said, ‘You can’t go in, members only. No staff, no interns.’ I looked at him, and I said, ‘Well, you might need to let me in to go vote then.’” Rozic said that he immediately went stark white. “Later, he apologized for not recognizing me, saying ‘I’m not used to members looking like you.’”

De La Rosa also mentioned that her marriage and daughter draw a lot of unwarranted critique. During her campaign, people would ask her why she wasn’t home cooking and cleaning, and would ask what she would do with her child while she was in Albany. “’I’m going to put her in my little kangaroo pouch, hop my way up to Albany, and legislate,” De Le Rosa added with a satirical grin. “It is not an impediment to being an elected official. It is empowering.”

“Part of being a woman in government and politics,” De La Rosa noted,  “is having that sisterhood, having the ability to go up to another women and say, ‘This just happened to me, and I’m rattled by it: What do I do?’ and surely there is surely another women in that room who has gone through that experience. We are the minority wherever we go. Albany is still very much a man’s world.” Rozic added that only 27% of the state legislature is female.

But despite experiences like these, all three agreed there should be more women in government. “One thing we’ve seen is a rise in the number of women running for office. A lot of people talk about the blue wave. Well, we talk about the pink wave,” said De La Rosa. Rozic added that “we’re collaborative, we have less drama, and we’re hard workers. We roll up our sleeves and get to work and really dig into issues and policy in a way that our counterparts often don’t do.”

The final advice the panelists had to offer was for people to take their situations into their own hands, emphasizing the importance of being informed, of voting and, if so inclined, of running for office. “Get involved because you don’t know how much of an impact you can have on your neighbor and on your community. Empowering one another is very important,” urged De La Rosa.

Rozic concluded that “when opportunity strikes, you need to be ready with a fistful of chutzpah.” 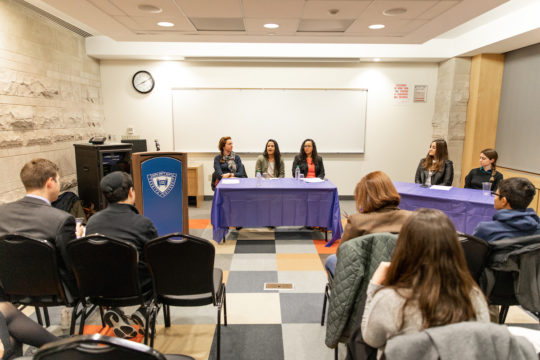