On May 3, 2018, more than 40 Stern College for Women students gathered in the 36th Street Residence Hall Lounge on the Israel Henry Beren Campus for Stern’s first all-female hackathon, CodeHer. The event brought together seasoned coders as well as beginners hoping to learn. 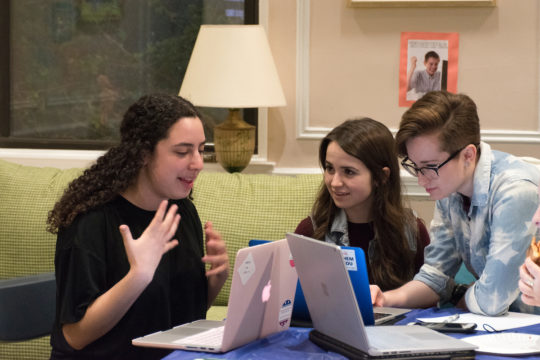 Participating coders were split into teams and spent the first portion of the night brainstorming what type of project they wanted to work on. Once they had a general idea, students discussed how they would be able achieve their goals through coding, using their knowledge of other similar apps and the algorithms. Then it was on to building out their projects and presenting them at the end of the event.

Ilana Radinsky, a computer science and physical science major and one of the creators of the event, thought it was important to create a space specifically for religious women. “At CodeHer, we were able to have a group of smart and motivated women learn from each other’s strengths, collaborate as teams, and join as a community,” she said. “Women are underrepresented in STEM fields, so it’s so important to show women how much they can accomplish in computer science and to provide opportunities for women to inspire and encourage each other.”

“New projects come out of hackathons all the time,” said Racheli Moskowitz, one of the organizers of CodeHer and a computer science and physical science major. “Creating an environment where computer scientists can meet, share their ideas, and create together is super powerful.” 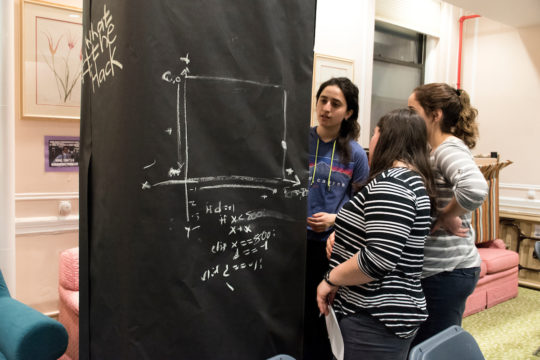 Apps created by the student teams included “Caf Hacks,” an app where students can see what food is available in the cafeteria without having to physically go there, rate items, and categorize them by brachot [blessings recited on food], among other features; as well as “Tweet Twins,” an app that compares similarities between Twitter users based on their hashtags, and then recommends other users to friend.

Elana Apfelbaum, a computer science and biochemistry major as well as a CodeHer organizer, said, “It is truly rewarding to see all that we are able to accomplish in a mere 24 hours. By creating a collaborative and fun environment, we hope to help Stern students thrive and explore their computer science potential.”