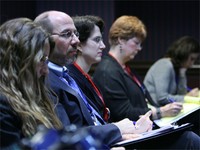 May 10, 2007 — More than 300 attendees came from all over the world when Wurzweiler School of Social Work celebrated its 50th anniversary with a three-day conference, “Celebrating a Tradition of Caring: Social Work Practice Yesterday, Today and Tomorrow,” at the New York Sheraton Hotel in Manhattan May 6-8, proving that the school has made an international impact in the field. With more than 200 presentations ranging from gerontology and ethics symposia to community development and advocacy workshops, social work professionals were treated to a broad range of topics.

To see a gallery of photos from the event, click here.

Wurzweiler 2004 alumna and conference presenter Jessica Rosenberg, PhD, a social work professor at Long Island University, expressed her gratitude to the school: “I am truly indebted to Wurzweiler—the best of any scholastic program—and came to celebrate.”

Fellow presenter and 1999 alumna Selina Higgins, a social worker with the New York City Administration for Children’s Services, came “to see all the great faculty and friends of Wurzweiler, and of course, to hobnob with fellow alumni,” she said.

Sunday’s events began with an address by keynote speaker Fernando Torres-Gil, PhD, director of the Center for Policy Research on Aging at the UCLA School of Public Affairs. He spoke about the new politics of aging and the diversity of younger generations and how these factors will alter the field of social work in the future. Edwin Mendez-Santiago, Commissioner of the New York City Department for the Aging, gave a response address that focused on the local challenges facing the graying of the Baby Boom generation.

An Evening Gala Celebration on Sunday night honored US Representative Charles Rangel and four members of the school’s board—Joel Daner, Herb Barbanel, and Elaine Schott and her husband, Rudy.

During a special luncheon later in the day, Dominic Carter, political reporter and anchor for NY1 and host of “Inside City Hall,” gave a powerful speech about growing up with his abusive schizophrenic mother. He described the life-saving role that social workers played during his childhood. “I want you to know that you are all heroes, and that without people like you, I would not be standing up here today,” Mr. Carter said.

After Mr. Carter’s speech, Catherine Papell, DSW, a 1978 graduate of Wurzweiler and professor emerita at Adelphi University, received Wurzweiler’s Lifetime Achievement Award for her more than 65 years of pioneering achievements in group work. “I have been a social worker, heart and soul, for all my many years,” Dr. Papell said on accepting the award.

Wurzweiler’s alumni director, Mark Miller, said the conference was a “huge undertaking. Most of the social work schools do not take on this kind of task, as it is very daunting, but this was a great opportunity for us. We have had a remarkable amount of community support.”