This week, the Yeshiva College Dramatics Society (YCDS) will perform Harvey, the 1944 Pulitzer-Prize winning comedy by Mary Chase. Opening on Saturday, April 21, the production’s narrative explores nuances of mental illness and how the mentally ill were treated and viewed in society in the 1940s, and challenges viewers to examine their own attitude toward mental illness.

YUNews sat down with students from YCDS to discuss the play, the challenges of producing a show during sefirat ha’omer (the period between Pesach and Shavuot in the Jewish calendar during which there are certain restrictions on listening to live music), and what Harvey’s message about mental health means for audiences today.

YUNews: Tell me about the play.

David Cutler ’18SB (YCDS president): It’s about a man, Elwood P. Dowd, and his imaginary bunny friend, Harvey, and how his family can’t deal any longer with all the shenanigans of this bunny so they try and lock Elwood up in the sanitarium. Through luck he keeps evading getting locked up, so it’s sort of a wild chase to find him.

Yaacov Siev ’20YC (head of marketing and social media for YCDS): He’s in this posh, upper society world. Everyone is putting on faces and trying to appear normal—how they’re expected to act in this society. Then there’s this guy who is just not conforming to that. He does these quirky things and has this personality and charisma about him that is unseen in any of these proper folk and that just shakes it up.

Hershel Siegel ’21YC (actor): You have these top-of-the-social-hierarchy people in charge of putting the “crazies” in the asylums but these are the people who are stuck in this square-box thinking. So that’s a great point that the play manages to push across very well.

YUNews: What are your roles in the play?

DC: I play the lead, Elwood P. Dowd. I’m the kooky brother of this posh high society man. I’m just happily living my life, but my brother and his son want to live life in society normally and they can’t because I always have this rabbit with me and I scare everybody away. Then they try to send me to the sanitarium and I’m being as nice and polite as I can to the doctors while they try to figure me out.

From an actor’s standpoint this role is something very new to me because I’m having to talk to something that’s not there. I’m having to look over and nudge the air because I’m really nudging a rabbit that no one else sees, so that was interesting to figure out how I could implement that into my acting.

YS: I play Dr. Julian Chumley. He is the founder and director of Chumley’s Experimental Rest Home for the Mentally Askew. He comes out and he’s business, he’s strict and he is there to treat the patients. He gets the respect of the people in the institution and they fear him in a way. Then as the play goes on, he actually starts to interact with Elwood and Harvey and he himself starts to see and believe in Harvey as well. Then he has this conflict where he is emotionally and ethically invested in his work and has to remain professional, but also has this new belief in Harvey so he grapples with whether he is able to actually profess that he sees and believes in Harvey.

HS: I play the character of Marvin Dowd, who is a 22-year-old bachelor visiting his uncle Elwood with his father Vernon after his grandfather’s death. All the property was left to Uncle Elwood, so we are trying to figure out what’s going on and whether we have a share in the property. Marvin is generally a very self-absorbed, very petulant, emotionally immature-type character who just wants to live a happy-go-lucky life. Throughout the play the viewers get to watch as he evolves from this emotionally immature child to trying to reconcile the values of success and love. I think that towards the end of the play the viewers will get a shock just because of how drastic a change my character goes through.

YUNews: This production faces some interesting challenges in that it will happen during sefirat ha’omer. What are some of the factors that go into producing a show during this time?

DC: We have the option to shave or not to shave, the only music you will hear will be a capella, etc. We’re working currently on getting a heter [permission] from rabbis for people to come see the show. We want to make it as kosher as possible and we really hope that people will come! We want people to know that Yeshiva College Dramatics Society is made up of guys that care about halacha.

YS: We have these challenges and we’re still making it work. We’re not letting this stop us. We’re still committed to abiding by the laws of Judaism—in this case sefirat ha’omer—and also our passion and devotion to the arts and theatre.

YUNews: Why is this play still relevant?

DC: We live in a world made up of a lot of quirky people and also there are unfortunately people who do have mental illnesses. They shouldn’t be looked upon so differently than everyone else. They should be treated with kindness and they should be taken care of. There needs to be an acceptance of those that are quirky and those that have certain disabilities. That message will always resonate.

YS: This play also takes a look at that issue from the point of view of the families. During the play, there are times where you are sickened by what the family of Elwood P. Dowd is doing, but at the same time you kind of sympathize. Everyone can be put under pressure, and even though yes, it is their brother and they do love their brother, everyone has their breaking point. Of course some of what they did should be looked down upon, but you also have to try and understand them. Back then the only option was to send a person with a mental disability to the mental institution—to completely just shut them out. Now we have all these different inclusion programs that are great, but we can’t forget that it’s difficult for the families as well.  The play makes you see their frustrations, how they’ve been living with it and again, how everyone has their breaking point.

HS: It applies even more so in modern society because back in the 1940s, if you didn’t dress a certain way or you didn’t have enough money or you didn’t have enough status, you were viewed as the outcast and you were different, so people didn’t want to deal with you. Here we are 80 years later and we have improved and evolved as a society, but even nowadays, in what we view as a progressive society, are we really any different than this 1940s mindset? Back then they were injecting people with all these serums in these institutions, but now we make everyone pop pills and then try not to think about them. Have we evolved? You have all sorts of people who are different than “normal” society. Are we still just as resistant as we were back then to let them in and to accept them for who they are? Are we really as different as we claim to be? 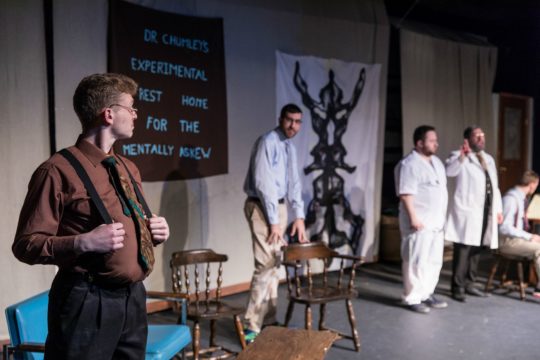 YUNews: What is the most rewarding aspect of being involved in YCDS?

DC: Being able to do something I love. It is very easy and comfortable to be Jewish in YCDS, so I get to go on stage and follow my passion. That final feeling of bowing on closing night and knowing that you made people laugh and enjoy themselves for two hours is very rewarding.

YS: To participate in the arts and be a religious Jew is great. There is something so inherently amazing about being able to impart these messages of happiness and sadness and being able to make someone really look at life in a way which you wouldn’t otherwise be able to observe. Also putting in so much work and time and then having that feeling of completion after the show is over and you see all the hard work come to a fruition.

HS: I love the interpersonal aspect. Having a dual curriculum where everyone has their own majors and they’re in their own sectors, you don’t always have a chance to really interact with them because they are in different classes. But being able to go every night and act with people outside of your majors and with different ideologies is beautiful because you get to meet all of these new people that you otherwise wouldn’t get to meet. Throw in the fact that you now have people coming to watch the show who wouldn’t otherwise really have artistic experiences in their daily school life. For a two-hour period, we get to transform their lives with these artistic ideas and thoughts that they wouldn’t otherwise interact with. It is such a powerful feeling to know that we can bring that to them through our acting.

Tickets can be purchased at ycds.ticketleap.com.