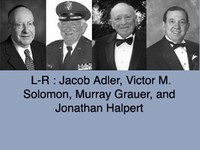 May 11, 2004 — The 2004 Yeshiva College Scholarship Dinner will honor four distinguished alumni of the college and will launch the celebration of YC’s 75th Anniversary.

The June 15 reception and dinner at the Marriott New York at the Brooklyn Bridge also features the 10-year reunion of the Class of 1994.

The honorees are Rabbi Dr. Jacob Adler, Rabbi Murray Grauer, Dr. Jonathan Halpert, and Rabbi Dr. (Col.) Victor M. Solomon. Each is being recognized for his service to the community at large and to Yeshiva University.

The dinner’s venue, on the Brooklyn side of the bridge, is just across the river from where Yeshiva College’s forbearing institution began in 1886 on the Lower East Side of Manhattan. Yeshiva Eitz Chaim opened at 44 East Broadway and eventually became what are today 17 different educational institutions under Yeshiva University, including Yeshiva College built in 1929.