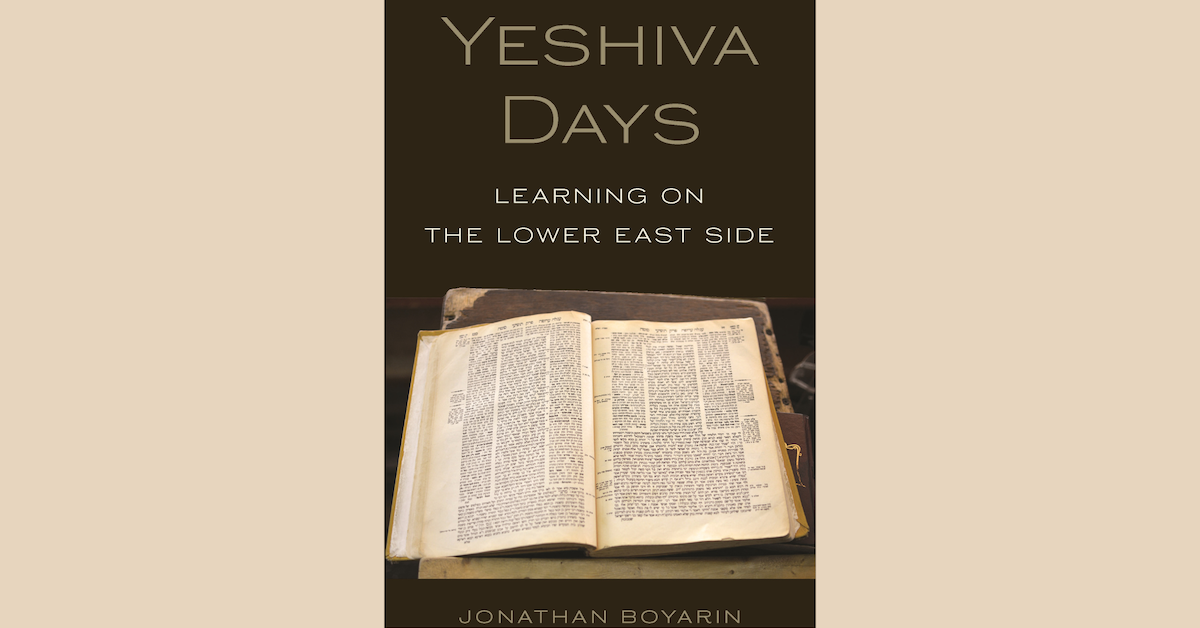 One of the deep tensions within a yeshiva is the contradicting inclusive and exclusive aspects of the institution. On the one hand, yeshivas all base themselves on the same Talmudic and biblical texts, setting a low ceiling for one to join in on the learning—at least on a broad level. On the other hand, yeshivas are tight-knit communities, with cultures and dialects built upon the unique idiosyncrasies, minhagim (customs and traditions) and characters who inhabit its walls throughout the zmanim (semesters). Most are male-centric, and some are skeptical of the modern world, limiting the number of people who can be granted true access and placing a curtain between those who are in and those who are out.

Yeshi­va Days: Learn­ing on the Low­er East Side by Jonathan Boyarin, the Mann Professor of Modern Jewish Studies in the department of Near Eastern studies at Cornell University, pulls back the curtain for those who cannot access this world. A mix of memoir and theological musings, Boyarin focuses on Mesivtha Tifereth Jerusalem (MTJ), one of the oldest and most storied Jewish learning institutions on the Lower East Side of Manhattan.

Boyarin himself is a reflection of the tension between inclusivity and exclusivity. Having grown up on the Lower East Side, Boyarin spent time in the yeshiva as a child and learned there during a year of academic leave (a time he dubs his “kollel year”), which is the main focus of the book. Still, as an academic not drenched in the yeshiva world, Boyarin often expresses his tendency to “lose the thread” of the shiur (class) discussion and his doubt on whether he could really come to belong there, academically and culturally. His doubts come through on the very first pages, as he recounts his embarrassment over delaying the Rosh Yeshiva’s shiur, all because he wanted to introduce himself to the rabbi.

Boyarin attributes his acceptance into the yeshiva—at least partially—to the fact that MTJ is not a “typical” yeshiva. He describes the institution as “Small and neighborhood-based… it is more informally structured than most Orthodox yeshivas.” Many of the students have other jobs, and there is a “greater willingness to exhibit awareness of ‘outside’ cultural references than one might find elsewhere in the yeshiva world,” which comes through a “deadpan, streetwise humor” that both remarks on and takes distance from some more antiquated trends one may find in certain spheres of the Orthodox world. But Boyarin approaches his time in yeshiva with an open mind and a sense of respect, eventually acclimating to the environment, improving his Talmudic skills and forming friendships with his fellow students.

Boyarin jumps back and forth in his narrative, focusing on his “kollel year” and the subsequent chunks of time he spent in yeshiva. He paints a full world, tracking his Talmudic studies while including anecdotes about Ramon the yeshiva custodian and the high school students who share the building with the yeshiva. Along the way, Boyarin dedicates an entire chapter to a meditation on the concept of learning leshma (for its own sake) and recounts a humorous yet uncomfortable shiva visit that saw his yeshiva and academic worlds briefly cross paths.

Boyarin also writes about the time he asked Rabbi Dovid Feinstein, who was Rosh Yeshiva at the time and died a month after the book’s publication, for permission to write the volume. For Boyarin’s sake and ours, the Rosh Yeshiva said yes, paving the way for a sensitive and enlightening volume that provides both the familiarity of an insider and the critical observations of an outsider.