The Yeshiva University Athletics Department held its annual awards banquet on Monday, May 13, 2019, in the Max Stern Athletic Center Gymnasium. More than 300 student-athletes as well as many coaches, administrators and guests were present to celebrate the success of the fifteen Yeshiva University varsity athletic teams.

Four fencers, three from the men’s team and one from the women’s unit, qualified for the NCAA Northeast Regional.

Junior Gabriel Leifer was named the Skyline Conference Men’s Basketball Player of the Year and became the first player in school history to be named a National Association of Basketball Coaches All-American as well as a member of the All-Met first team. 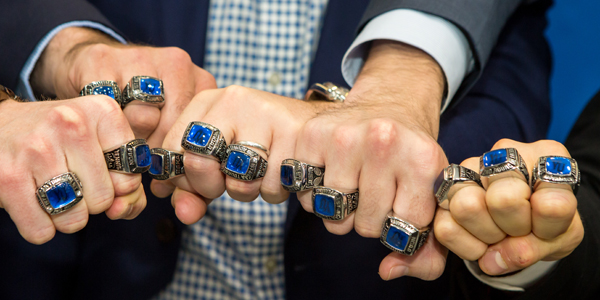 Senior Michal Alge, of the women’s basketball team, finished her illustrious career by setting program records in scoring and rebounding with 1,159 points and 1,236 rebounds. The four-year standout became the first 1,000-1,000 player in program history.

Freshman phenoms Jonah Beberman (men’s soccer) and Ryan Turell (men’s basketball) were both named the Skyline Rookie of the Year for their respective sports.

Graduation Awards
The Aaron Meyer Memorial Award in recognition of selfless dedication to the athletics program. Presented to Sarah Hiller (for the second year in a row)