On Sunday, December 9, 2018, over 650 people celebrated Yeshiva University’s 94th Annual Hanukkah Dinner and Convocation at the New York Hilton. Dr. Ari Berman, President of Yeshiva University, conferred honorary degrees upon Hadassah Lieberman, an advocate for Jewish and global causes, and J. Philip Rosen, a partner at Weil Gotshal & Manges LLP, trustee of Yeshiva University and vice-chair of the Birthright Israel Foundation. Bennett Schachter, managing director of the investment banking division at Goldman Sachs, was the inaugural recipient of the YU Shield, an award created this year to reward service to the University.

In his welcoming remarks, Dr. Berman noted that “including this year’s dinner journal—which raised over $5 million—in these past number of weeks during our Hanukkah dinner season we have raised over $20 million in new commitments” to fulfill the University’s mission of educating the leaders of tomorrow. In his remarks, Dr. Berman described the way in which we are preparing our students to assume their place in history. “We have established two central pillars on which we are building the future of Yeshiva University: values and leadership and the market skills of the future.” Undergirding these pillars, Dr. Berman explained, is the deep, historic relationship between Yeshiva University and Israel, including tight partnerships and pathways between the University, elite Israeli universities and Israeli start-up companies. This twin focus will prepare YU students “to serve as deeply rooted and forward-focused voices in the global moral conversation and to succeed in the marketplace of tomorrow and wield their influence for the benefit of the Jewish people and society at large. Our students are the leaders of the future.” Dr. Berman emphasized that “an investment in Yeshiva University ensures a strong and vibrant future for the Jewish people.”

Dr. Berman congratulated Lieberman for “dedicating your life’s work to helping build a better world” through her lifelong dedication to health issues, assisting nonprofit organizations, improving educational standards and promoting international understanding. Among her many professional pursuits, she has developed an advisory network for women’s health based in Jerusalem at Shaare Zedek Hospital, created a series of national conferences on health-related issues and worked to link American business and industry to world-class standards in mathematics and science at the National Research Council. Lieberman has also devoted herself to community service, including the Auschwitz Jewish Center Foundation and the American Friends of the Open University of Israel, where she serves as a vice president on the board, among others. “You are a deeply beloved and valued role model,” Dr. Berman observed, “an exceptional leader and a true inspiration to our community, our people and our broader society.”

Dr. Berman praised Rosen, a member of both the YU Board of Trustees and the Yeshiva College Board of Overseers, for his leadership roles in the Jewish community and American and Israeli politics. “You are a great Jewish leader,” he said, “whose highest ambition is to advance the welfare of our people, and this sacred mission has been a defining feature of your life. You know better than anyone that Yeshiva University is the best guarantee for the future of the Jewish people, and through your leadership and good work, you’ve had a unique privilege to influence the course of Jewish history and have a say in helping the world.”

In introducing Paul Singer, Dr. Berman lauded his many professional achievements as well as his philanthropic contributions, including a leadership role in promoting the traditional American virtues of free inquiry and free markets and an investment in Israel’s entrepreneurial ecosystem through Start-Up Nation Central. In his speech, Singer described a world where “no matter how much value Jews and Israel contribute to the world…deeply visceral Jew hatred around the world—especially in Europe—is bubbling up once again, reminiscent of the periodic waves of discrimination and murder that have plagued Jews around the world for centuries.”

In a world like this, he said, Yeshiva University must “be the bridge between America and Israel; between the world of Jewish tradition and the larger Jewish community; and between the Jewish people and the non-Jewish world. In a world where so few are proud to identify with Israel, you proudly do so; in a world where Jewish tradition and identity are being lost, you showcase Judaism at its most vibrant…. We need your voice in the broader Jewish community and, more than ever, as engaged participants in the American civic square.”

This year marks the inauguration of the YU Shield, an award given to honor those who have shown a strong and dynamic volunteer commitment to forwarding the mission of the University.
The 2018 recipient of the YU Shield is Bennett Schachter, a managing director in the Investment Banking Division of Goldman Sachs. A previous chair of the YU President’s Circle, he leads Goldman Sachs’ Yeshiva University recruiting effort into finance and has successfully set an example for YU alumni and supporters at other financial institutions to do the same.

Attendees left uplifted by the vision and inspired by the impact of the YU network, as Yeshiva University continues its great trajectory of growth, building tomorrow, today. 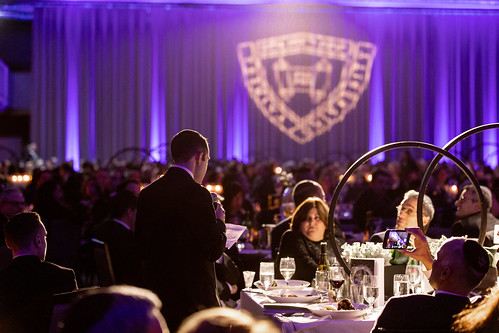