Ensuring That What Happened Before Does Not Happen Again

On January 24, 2019, Naomi Azrieli, chair and CEO of the Azrieli Foundation, and Julius Berman, president of the Conference on Jewish Material Claims Against Germany (known as the Claims Conference), both of whom are members of the Board of Trustees of Yeshiva University, jointly announced the release of a comprehensive Holocaust Knowledge and Awareness Survey of adults in Canada. This follows a similar survey done in 2018 for the United States.

Both studies found a stunning ignorance of basic historical facts and a lack of detailed knowledge of the Holocaust. In the press release announcing the study, Berman noted that “as the UN International Holocaust Remembrance Day approaches, we are reminded of how important education is if we are to ensure that the atrocities of the Holocaust will never happen again.” (Click here to read an interview done with Julius Berman.)

International Holocaust Remembrance Day (IHRD) was established by the United Nations as a day for member states to honor the Jewish victims of the Holocaust and millions of other victims of Nazism. In many respects, Yeshiva University honors the mission of the IHRD year-round with events and programs aimed at both preserving the stories of survivors and promoting a wider awareness of the Holocaust.

For instance, the Student Holocaust Education Movement (SHEM) holds an annual commemoration honoring Holocaust survivors and victims in the storied Lamport Auditorium on the Wilf Campus. Last year’s event presented the stories of Bernard and Henry Schanzer, twin brothers whose family survived through the kindness of “righteous gentiles” in France who hid and protected them. Tali Naor ’18S, then-president of SHEM, said, “All of us sitting here in this room are living proof that the Nazis were wrong. We, the Jewish people, cannot be destroyed. Tonight, we will honor those who perished, those who survived, and those who dedicated their lives to telling their stories and ensuring that the memories of the Holocaust are never forgotten.”

SHEM also sponsors an annual Kristallnacht lecture in November, featuring speakers who detail their experience of the horrendous events of November 9-10, 1938, and engage in conversation with the people in attendance. In 2018, Norbert Strauss spoke about “My Life Under the Nazis: 1933-1941.” Yosef Sklar ’19YC, one of the co-presidents of SHEM, noted that “it is these personal, face-to-face encounters with Holocaust survivors like Mr. Strauss that is invaluable and that we hope to continue to organize for as long as we can.” (Previous Kristallnacht lectures featured Rabbi Meir Fulda z”l, the beloved teacher who passed away this past July.)

2018 saw the 80th anniversary of Kristallnacht, and several YU instructors wrote stirring essays on the topic. Mordecai Paldiel, the former director of the Department of the Righteous Among the Nations at Yad Vashem as well as an author and teacher, observed that “we know all too well that anti-Semitism remains a dangerous force in our world and in our free nation. Let the anniversary of Kristallnacht be a reminder to the civilized world and younger generations to act against evil regimes who flout the elementary rules of civilized conduct before they cause untold damage and hurt millions of innocent people.”

Tova Rosenberg, creator of the acclaimed “Names, Not Numbers©” Intergenerational Holocaust Oral History Film Project, added that “this future will not be a bright one unless our children are properly educated, . . .unless they know how to prevent prejudice, hatred, intolerance and injustice. The first step is to mandate Holocaust and genocide education. . . to ensure a brighter future.” (Click here for more information about Names, Not Numbers.)

Prof. Richard H. Weisberg, founder of the Program on Holocaust and Human Rights at the Benjamin N. Cardozo School of Law, noted that education about Kristallnacht and the Holocaust that followed must confront “the social influences—historical, religious and contemporary—that motivate an individual or a nation to want to destroy the Jewish ‘other.’” A crucial component of the Program is the Benjamin B. Ferencz Human Rights and Atrocity Prevention Clinic, named after the legendary prosecutor at the Nuremberg trials. In 2017, Ferencz was honored upon the 70th anniversary of the opening of the Einsatzgruppen case at those trials for his work and philanthropy toward building a more peaceful and humane world.

Yeshiva University also uses the arts to promote learning about the Holocaust. Dr. Karen Shawn, associate professor of Jewish education at the Azrieli Graduate School of Jewish Education and Administration, is the editor of PRISM: An Interdisciplinary Journal for Holocaust Educators, published by Azrieli with support from the Rothman Foundation. In a wide-ranging interview with her last year, she stated strongly that Holocaust education “is one of the most important learning experiences we can offer [because] we all live in the shadow of the Holocaust, and trying to understand it and its ramifications is imperative if we are to try to understand and help to heal the world in which we live.” 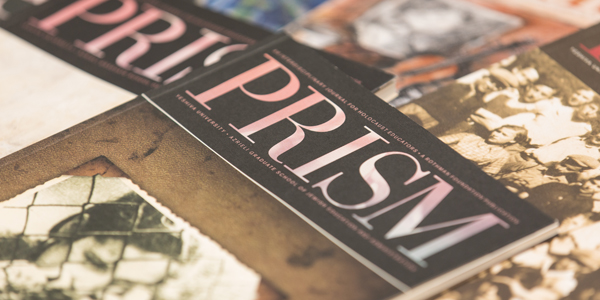 In the past year, the Yeshiva University Museum has mounted two exhibitions that address Holocaust memory and memorialization: Lost & Found: A Family Photo Album and Kindertransport–Rescuing Children on the Brink of War.

Lost & Found displays the contents of a photo album smuggled out of the Kovno ghetto in 1943 and preserved by a non-Jewish family until 2016, when the album was returned to the original family (which included Dr. Jacob Wisse, director of the Museum and the great-nephew of Annushka Warshawska, the woman who smuggled photos out of the ghetto). Anna was deported with her two teenage daughters to a death camp in Estonia soon after, and the recovery of the album “fulfills one of Anna’s last acts,” said Dr. Wisse, “which was to preserve these images—and the memory of the people that appear in them—for future generations.”

Kindertransport tells about the amazing rescue effort put into place shortly after Kristallnacht to send Jewish children out of Germany to safety in countries who had agreed to take in the young refugees. Lou Bravmann, a member of the Board of Trustees for the University and the Board of Overseers of the Museum, spoke recently about his experience as one of the Kinder shuttled out of his hometown of Würzburg, Germany, in 1939 to spend 2½ years in the small Swedish farming village of Tjoernarp, eventually reuniting with his sister (who had been in England) and his parents in the United States.

“It’s important for younger people to know about the Holocaust,” said Bravmann. “It’s part of Jewish history; it should be part of German history and European history as well, part of world history. The younger generation should know what can happen to other younger people like themselves.” 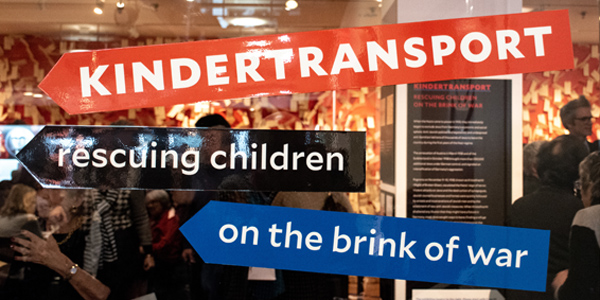 Lucy Lang, a trustee of the YU Museum and another Kinder sent to safety from her native Vienna, Austria, spoke about how important it is for people to understand the sacrifices parents made when they sent their children away, “not knowing whether they would ever see us again,” especially when, as it turned out, the great majority of the children sent away never had the chance to reunite with their families. “We all have to appreciate our parents and feel good that we have our children with us and that we can take care of them.”

Responses by visitors to Kindertransport demonstrate the overwhelming importance of exhibitions like this in keeping the memory of this dangerous time alive and vibrant. According to Ilona Moradof, associate director of administration and special projects at the Museum and curator of the exhibition, and Ilana Benson, director of museum education, the event has drawn a diverse audience, among them Kinder and their families, school and synagogue groups, locals and tourists, and Jews and non-Jews.

“For the Kinder and their families,” said Moradof, “the exhibition is deeply personal. Many recall the courage and strength of the parents who made the unimaginably difficult decision to send their children away to save the children’s lives, and they mention the gratitude for the individuals who took care of them. What I hear most often from visitors,” Moradof added, “is how much many of the themes that are explored in the exhibit seem familiar to them and are still relevant in current debates taking place worldwide around refugees and immigration.”

Benson also noted that “many of the messages left by visitors in the exhibition’s guestbook stress the lessons learned from the Kindertransport.” Sandra (Leven) Fishman, daughter of Kind Gerd Leven, wrote in the guest book that “if it wasn’t for the generosity of the people of England, I would not be here today.” Another visitor noted that “my mother was a Kindertransport child. She now has a great-grandson.” One visitor noted that “we need to learn from our history and stand for those in need.” Other messages emphasized the same point: “Continue to tell the stories and spread peace and tolerance”; “May we all accept each other and continue to love all”; “Let the Kindertransport and its triumphs and tragedies be a lesson to all, Jewish and non-Jewish that is all of our responsibility to protect all human lives and to recognize our own roles in the systems that cause this sort of oppression.”

This brief survey only covers a small number of the many ways Yeshiva University is committed educationally and spiritually to preserving the memory of the Holocaust and working to ensure that it is not forgotten and does not happen again.