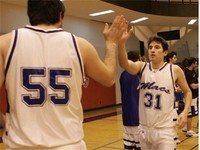 Jan 10, 2008 — Coming off of two straight wins that saw the Yeshiva University Men’s Basketball team defeat Medgar Evers 58-47 on Dec. 22, and Skyline Conference powerhouse SUNY Old Westbury 58-57 on Dec. 27, the Maccabees was rewarded with a sweep of the Skyline Conference weekly awards.

Sophomore Alex Claster was named the Conference’s Player of the Week, becoming the first YU student-athlete from any team to earn the honor during the 2007-08 academic year. In addition, freshman Zachary Gordon was named the Skyline Conference Rookie of the Week for the fourth time this season. Gordon was also named to the D3Hoops.com Team of the Week for the second time during what has become an outstanding freshman campaign.

Claster’s honor comes after the forward missed much of the early part of the season with an ankle injury that limited him to a combined eight points during four games played. Against Medgar Evers, he saw his first extended playing time of the season, and scored 17 points (on 6 for 11 shooting), and grabbed six rebounds. Five days later, Claster spearheaded an improbable comeback, as YU trailed 2007 Skyline Conference Finalist Old Westbury 41-24 with 18 minutes remaining in the game, but stormed back for their biggest win of the season. Claster repeated his 17-point feat, the final three of which were scored on a three-pointer with 24 seconds left in the game that put YU ahead for good. He also grabbed six rebounds once again.

For the 2007-08 season, Claster is averaging seven points and 2.3 rebounds per game, but after his performance over the last two games, his numbers are expected to improve as the season continues.

Gordon has emerged as the Skyline Conference’s top rookie, earning Rookie of the Week for the fourth time during six weeks of awards this season, and his selection to the D3Hoops.com Team of the Week was his second during seven weeks of awards. He received the honors after averaging 21.5 points, 8.5 rebounds, four assists, and two blocked shots per game. Gordon notched a double-double – the second of his career – with 21 points and 11 rebounds against Medgar Evers, and then scored 22 points, grabbed six rebounds, dished out six assists, and blocked three shots against SUNY Old Westbury.

For the 2007-08 season, Gordon is currently tied for second place in the Skyline Conference in scoring (20.7 points per game), seventh in rebounding (7.0 per game), and third in blocked shots (1.75 per game).