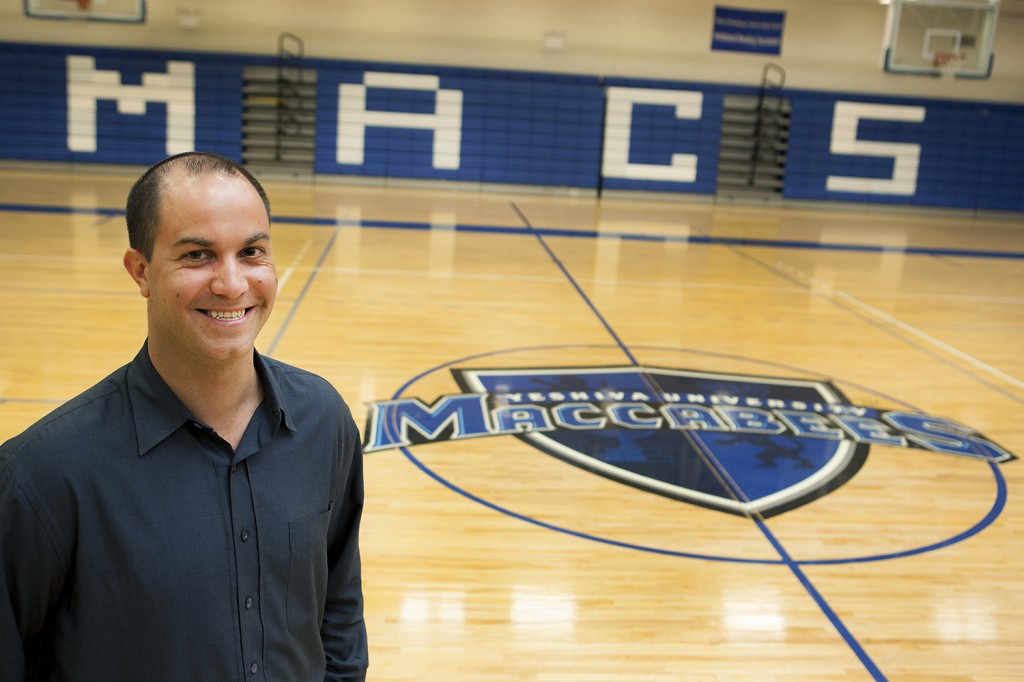 Yeshiva University has announced Elliot Steinmetz as its head men’s basketball coach.  Steinmetz, a 2002 graduate of YU’s Sy Syms School of Business who lettered on YU’s basketball team for three seasons from 1999-02, will be responsible for overseeing all aspects of the men’s basketball program while ensuring the academic success of its student-athletes.  He has served with distinction as head coach of the varsity basketball team at North Shore Hebrew Academy High School and of the gold medal-winning United States 18 and Under Boys Basketball Team for the Maccabiah Games in Israel.

Steinmetz was hired after an international search that attracted more than 200 applicants, led by a 14-member advisory committee that included athletics and coaching personnel from high schools, universities and professional sports teams. The search was chaired by Shabsi Schreier, captain of the Maccabees from 1983-85.

“As a Yeshiva University alumnus and past captain of the basketball team, it has been a privilege to chair this esteemed and dedicated committee,” said Schreier. “We have worked hard to find the best coach to ensure that Yeshiva University basketball’s rich history of values and excellence both on and off the court is continued.  I am confident that Coach Steinmetz will build upon Coach Johnny Halpert’s extraordinary legacy and take our team to the next level.”

“The level of due diligence performed on each applicant, the integrity, professionalism and sharing of opinions by a very diverse group of committee members would rival searches that I have witnessed at professional sports teams,” said Joel Mael, vice chairman of the Miami Marlins and a 1979 graduate of YU who participated in the search committee.

Steinmetz said, “I am both honored and excited to have the opportunity to once again be a part of Yeshiva University basketball.  Studying and playing at Yeshiva was one of the most memorable and educational experiences of my life.  I am humbled by the history at Yeshiva and thrilled to be a part of the future as we move forward with the basketball program.”

Steinmetz joins the athletics program at a time of unparalleled energy and accomplishment. Both the men’s and women’s cross country teams, as well as men’s volleyball, won Hudson Valley Intercollegiate Athletic Conference Championships this past year. Two women’s basketball players led the entire National Collegiate Athletic Association  in both rebounds and steals per game, and YU softball enters its first year as a varsity sport. Meanwhile, the men’s tennis team conquered the Skyline Conference Championship to become the first YU team ever to earn a spot in an NCAA tournament in any sport.

The excitement and success is due in no small part to the high-level training student-athletes have received from the award-winning coaching staff Steinmetz will join, and his record makes him the perfect complement to the program.

Most recently, Steinmetz has served as head coach of the varsity basketball team at North Shore Hebrew Academy High School in Long Island, New York. Over the past three years he guided the North Shore Stars to a 66-14 overall record and led the team to its first ever Metropolitan Yeshiva High School Athletic League championship appearance in 2013. In 2014, he led the team back to the championship game. Before that, Steinmetz coached the varsity basketball team at Hebrew Academy of Nassau County from 2005 to 2010 where he guided the Hurricanes to a 104-44 overall record.

Steinmetz is the former owner of JV Elite, Inc. where he managed an intense summer basketball training program for top Jewish high school basketball players nationwide until its sale in 2008.

“It’s wonderful to bring on board a coach who has firsthand experience with YU basketball,” said YU director of athletics Joe Bednarsh. “Elliot has a history of winning at every level he has coached including international play. He has coached high-level players, including the Ivy League Freshman of the Year. I’m excited for what Elliot will do as we continue to move the program into the future.”