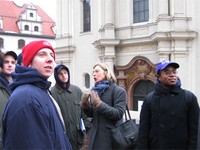 The YU students experienced first-hand the Jewish experience in Germany—the historic sites of their destruction, including Worms, the city whose Jewish presence dates back to the late 10th century, and Munich, the birthplace and center of the Nazi Party. The 11-member delegation explored the resurgence of Jewish life in modern Germany, evidenced by the influx of some 100,000 Jew from the former Soviet Union in recent years.

The students visited the German Bundestag (parliament), where they met with members of parliament from the FDP (Liberal), SPD (Social Democrat), CDU (Christian Democrat) parties, and a member of the Green Party.

They also visited the memorial site at Ravensbruck. In Munich they were hosted by the community rabbi, Rabbi Steven Langnas, a YU alumnus, and in Frankfurt they were greeted by Rabbi Binyamin Krauss, also a YU alumnus, director of the Lauder Chorev Midrasha of the Ronald S. Lauder Foundation in Frankfurt.

In Berlin, the group was the guest of Rabbi Joshua Spinner, director of the Beit Midrash and of Lauder operations in central and Eastern Europe. They studied, prayed, and ate with more than 23 students, natives of the former Soviet Union, Germany and other Eastern European countries, and gained insight into community building and fostering Jewish life and learning.