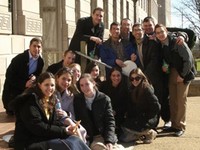 “These are important to students because of their support for Israel,” said Laya Pelzner, vice president of YUPAC and one of the trip’s organizers. “The American Foreign Aid Bill and the Palestinian Anti-Terrorism Act relate directly to Israel, and lobbying against nuclear proliferation is extremely important in light of the President of Iran’s statement to wipe Israel off of the map.”

Students met with professionals from The American Israel Public Affairs Committee (AIPAC) on Monday to learn about effective lobbying techniques and to receive the latest information about the issues. Each student had two appointments in Congressional Offices and a second meeting at AIPAC to debrief.

While they were in Washington, students visited the United States Holocaust Memorial Museum. They also met with Suzanne Anziska, deputy chief of staff for Congressman Brian Higgins, D-NY, and Maury Litwack, legislative aid for Congressman Chris Cannon, R-Utah. Ms. Anziska and Mr. Litwack discussed their jobs and their experiences as observant Jews working in politics.

“The students on the mission all came back inspired and energized,” observed Ms. Schiller. “Those of us who attended the mission are looking for new ways to get the student body more involved in the political process.”