Over the weekend of Nov. 9 and 10, 2019, Dr. Ari Berman, President of Yeshiva University, and Rabbi Dr. Josh Joseph, senior vice president, gave several talks to the friends of the University on the west coast. Dr. Berman spoke at Young Israel of Century City on “Education in the World of Tomorrow” with a follow-up talk at the home of Freda and Sandy Small on “Jewish Values in a New Era.”

Dr. Joseph spoke at the Westside Shul on the topic of “Is 99 Enough? When the Good and the Great are Both Achievable.”

They also met with students and staff at several schools. The President addressed the entire student body at Yeshiva University of Los Angeles Boys High School and received a campus tour by Rabbi Aryeh Sufrin, head of school, and Mr. David Nagel, chair of the Board.

Dr. Joseph met with Rabbi Ari Segal, head of school at Shalhevet High School, and Rabbi Josh Spodek, head of school at Yeshiva University of Los Angeles Girls High School, to discuss how their schools can work with YU in future endeavors. He also had the chance to speak with student leaders and those interested in Yeshiva University at both schools.

“The Los Angeles community became Yeshiva University’s home away from home,” said Dr. Joseph. “Whether eating together, davening, in conversations with current and future parents or student leaders at YULA and Shalhevet, we felt an energetic and welcoming embrace.”

Close to 1000 YU fans, include alumni and current parents, attended the opening games of the men’s basketball team, who began the season with games against Occidental College (Nov. 9) and California Institute of Technology (Nov. 10), losing the first (72-60) but winning the second (77-58).

The games marked the homecoming of several LA-area YU players, including sophomore Ryan Turell, who thrilled a contingent of fans from Valley Torah (his high school) with a game-high 37 points on Sunday; senior co-captain Simcha Halpert and his younger brother Eitan (both attended Shalhevet HS); Max Liebowitz (Valley Torah); and Aidan Sokol (Shalhevet).

This trip has established a closer partnership with the Los Angeles community, and Yeshiva University looks forward to strengthening that relationship through exciting events like these and substantial discussions with all the stakeholders involved. 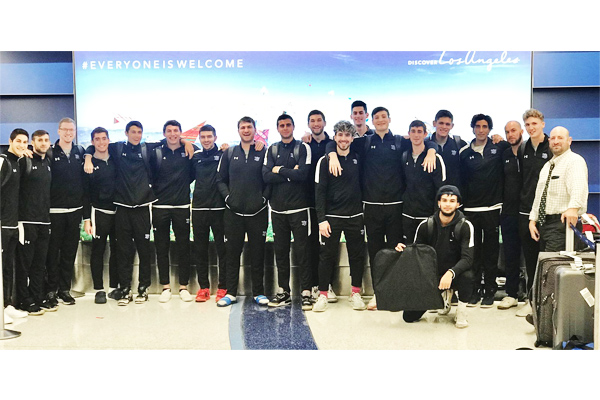