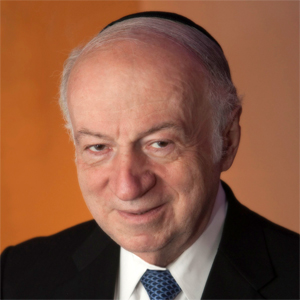 Julius Berman, president of the Conference on Jewish Material Claims Against Germany as well as a member of the Yeshiva University Board of Trustees, discusses new data from the Conference’s latest survey on critical gaps in Holocaust knowledge and explores the issues we need to address to advance Holocaust awareness on a global basis.

On Yom HaShoah, Holocaust Remembrance Day, the Conference on Jewish Material Claims Against Germany, known also as the Claims Conference, released a comprehensive Holocaust Knowledge and Awareness Survey of adults in Austria. This marks the third in a series of surveys focused on the need for Holocaust education that the Claims Conference has conducted in the past year.

Similar to the April 2018 survey of the United States and the January 2019 survey of Canada, the Austrian study identified gaps in awareness of historical facts and knowledge of the Holocaust. More than half (56 percent) of those surveyed did not know that six million Jews were killed during the Holocaust. That number rose to 58 percent among the millennial and Gen Z generations. The survey also found that an alarming number of Austrians (58 percent) assumed that something like the Holocaust could happen again in other European countries.

Of additional concern was how the majority of respondents perceived their own country’s Holocaust legacy. Sixty-eight percent said that Austria was both a victim and a perpetrator of the Holocaust. When asked to name a death camp, concentration camp or ghetto, 42 percent of Austrians could not name Austria’s Mauthausen, one of the first massive concentration camp complexes in the Third Reich and the last to be liberated by the Allies.

In a statement regarding the Austrian results, Matthew Bronfman, chairman of the survey task force, remarked, “It’s clear we have a problem when an astonishing number of Millennials and Gen Z believe two million Jews or fewer were killed during the Holocaust. We are failing to teach our young people, and the consequences will be devastating.”

YU News sat down with Julius Berman, president of the Claims Conference, to get his reaction to these latest survey results. As a tireless advocate for Holocaust survivors and Holocaust education, he has helped the world comprehend the enormity of the Shoah and has worked to preserve the historical record in the hope that subsequent generations will never forget.

Here are some excerpts from the conversation.

What is your reaction to this new Claims Conference survey conducted in Austria?
This is the third survey the Claims Conference has conducted globally in the past year to measure Holocaust knowledge and awareness. And here again, we are seeing disturbing trends pointing to the lack of Holocaust knowledge. Without education, we risk the history of the Holocaust being distorted and otherwise denied and those who were murdered being forgotten. Effective education is paramount towards ensuring that what happened in the past does not repeat itself.

What about the historical revisionism that the survey results underscored?
In Austria, the Anschluss [the political union of Austria with Nazi Germany in 1938] was a real thing. It actually happened. But now, in 2019, what we are seeing is a growing loss of knowledge, and as the loss deepens, denial sets in. Little by little, the history of collaborationist governments is being whitewashed and revised. Setting the record straight about historical facts and figures surrounding that period is imperative. Right now, we are in era of growing anti-Semitism and fake news, where for the uninformed it’s hard to distinguish what is true and what isn’t. That’s why education, especially focused on younger generations, is critical. The wide dissemination of the history and lessons of the Shoah is an urgent, time-sensitive priority. The generation of survivors alive today are the last. Soon their individual accounts will fade from memory. Clarity about the Holocaust is essential.

How is the Claims Conference answering the need for Holocaust education in these complex times?
Teacher education is critical. The more teachers know and understand, the greater their influence and impact on students. Towards that end, the Claims Conference funds institutes, seminars, master’s programs and much more to help teachers develop the skills needed to discuss and explore the complexities of the Holocaust. Over a three-year period, the Claims Conference has provided training to teachers from 59 countries with an estimated long-term impact on 30 million students. We are also using new educational vehicles to reach younger generations. A case in point is the financial support we offer filmmakers. Just this past February, the Claims Conference, in partnership with the Paley Center for Media in Los Angeles, presented the second edition of a special forum on Holocaust film: “Eyewitness: Documenting the Holocaust on Film.” (The first edition of the forum took place in December 2018 in New York City.) The program integrated excerpts from some of the exceptional films that have received grants from the Claims Conference along with in-person recollections from survivors. We have helped fund around 100 films produced in more than 13 countries.

Where do we need to go from here?
What this most recent survey indicates, similar to the two surveys that preceded it, is that younger generations, regardless of their countries, know less and less about the Holocaust. We need to continue to find the right way to broadcast the story of the Holocaust to young people worldwide and, in this age of social media, to make the subject relevant to them.

At the Claims Conference, we are exploring how to better engage young people across the globe through more innovative uses of media and other channels. By so doing, we can broaden our reach and make a real impact in those parts of the world where Holocaust denialism and distortion are taking root.

Any last thoughts?
When we look at the results of this latest survey, it’s easy to think that we’re losing ground. But we’re not, especially if we can combat ignorance with education. On an encouraging note, an overwhelming majority of survey respondents (75 percent) believed it is important to continue teaching the Holocaust so that it does not reoccur. Eighty-two percent said all students should learn about the Holocaust in school, and 76 percent believed it should be compulsory in school. This theme echoes similar results in the Claims Conferences Holocaust Knowledge and Awareness studies in the United States and in Canada.

So this is the challenge before us, our call to action: We need to push ourselves to think more broadly and creatively about how to effectively reach the next generation. This is our responsibility to the world and, more importantly, to the survivors who sacrificed so much.

For more information about Yeshiva University and Holocaust education: