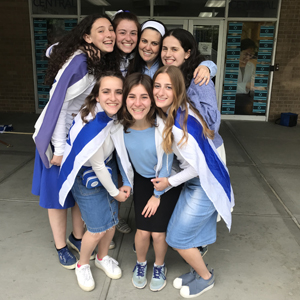 At Central, it was an intense and exciting week on the Jewish calendar. On Wednesday, May 8, students marked Yom Hazikaron with a traditional tekes [ceremony] honoring Israel’s fallen. Pictures of soldiers and citizens, killed defending the State of Israel, lined the hallways, and students spent the day in solemn remembrance.

As students were leaving Wednesday evening, whispers and decorations for what was to come could already be seen and heard, and Thursday erupted into a day of celebration of Yom Ha’atzmaut. With all classes canceled, students had the time to learn exclusively about the State of Israel: its history, language, culture and Torah from an array of faculty. They also enjoyed tons of fun such as mock Tzahal [Israeli Defense Forces] training that involved games like Code Names, Battleship, and others, an Israel Culture Fest, including dance and song, and delicious Israeli food for breakfast and dinner. Am Yisrael Chai!

MTA commemorated Yom Hazikaron with a meaningful program, featuring a moving speech by former lone soldier and Michael Goldman, a current students taking semicha [rabbinic ordination] at the Rabbi Isaac Elchanan Theological Seminary, who shared his experience fighting for Israel in Gaza and discussed how his faith helped him get through such a difficult time.

Students also observed a moment of silence on behalf of all of Israel’s fallen soldiers and watched an emotional video of Rabbi Eliyahu Meirav, stepfather of 19-year-old Sergeant Yosef Cohen, hy”d, who was killed in a terrorist attack.

The students celebrated Yom Ha’atzmaut with an exciting chagiga, featuring live music and dancing. Students and rabbis rejoiced together as they honored Israel’s declaration of independence.

Following the celebration, everyone participated in a conversation with MTA alum Matthew Albert (’17), who described his experience making aliyah and drafting into the Israeli Defense Forces (IDF), where he serves in a special forces unit in “mishmar hagvul,” the Israel Border Police. Matthew discussed how participating in MTA’s Makor Chaim Israel Exchange Program made a tremendous impact on his love for Eretz Yisrael.

He also talked about the strong foundation MTA gave him, which helped him endure all of the challenges he faced during his IDF training. Matthew shared a story about a particularly grueling training exercise that took place around Purim, which made him feel like giving up. Just when he had reached his breaking point, a van pulled up with mishloach manot [gifts of food and drink] for the soldiers and a big sign that read “Chag Sameach, With Gratitude From Yeshiva University High School For Boys,” organized by the Meir Mishkoff a”h Mishloach Manot Campaign. The Mishloach Manot initiative was started by MTA alum Eytan Mishkoff (’06) in memory of his father, Meir a”h (’75,) who ran a 20-year Purim campaign supplying mishloach manot to IDF soldiers. The sign and memory of MTA gave Matthew the strength to continue his training.

Students were inspired by his story and encouraged to follow in his footsteps and become Jewish communal leaders.