The YU community gathered together to commemorate Yom HaZikaron and Yom Ha’atzmaut at events held at Wilf and Beren campuses. Students had the opportunity to honor their Israeli heroes as they heard from former Israeli Defense Forces (IDF) soldiers who shared their moving personal experiences.

On Tuesday evening, May 7, 2019, students participated in a screening of “Beneath the Helmet,” which provided insight into the IDF experience.

The tekes held on the following night, began with a sound of the siren and an IDF veteran, now a YU student, lowering the Israeli flag. What followed were personal perspectives from student leaders, including that of Daniel Gottesman, who offered a first-hand account of his service in the IDF. YU students shared their thoughts on what makes a hero in a video presentation.

Rabbi Yotav Eliach delivered a passionate keynote, which provided a historic overview of Israel, from its birth to present day. His presentation offered an in-depth look at the tremendous efforts and sacrifices made to pave the way for the modern State of Israel and reflected on how its establishment was a miraculous event after years of yearning and struggle. He referenced what it would be like if past generations were alive today to witness how Israel has grown in the past 71 years. Immediately following Rabbi Eliach’s keynote were a Y-Studs performance, “Tefilla for the Medina,” led by Dr. Ari Berman, and the raising of the flag by Omri Ohayon, who recently joined YU after having served in the IDF.

Afterward, the YU community celebrated Israel’s 71st birthday with performances from the Y-Studs, an inspirational dvar torah from Rabbi Meir Goldwicht and a special tefillah hagigit. Students then joined YU leadership, staff and rebbeim for a celebratory chagigah in the Max Stern Athletic Center.

On Thursday, May 9, 2019, Yom Ha’atzmaut, special shiurim [lectures] were held on both campuses, with Dr. Michelle Levine, Rabbi Robinson, Prof. Smadar Rosensweig, Elana Stein Hain, Rabbi Yaakov Trump on the Beren campus and a special seuda chagigit with the Roshei Yeshiva, led by Rabbi Aharon Kahn for over 400 students, on the Wilf campus. Concluding the event was a celebratory Israeli-themed BBQ. 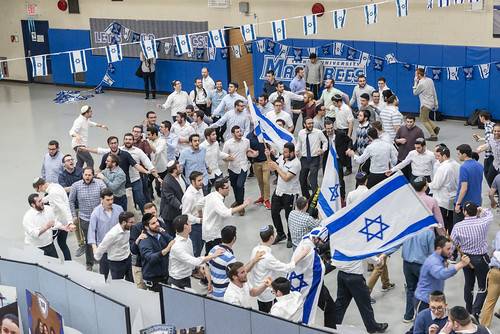