Yeshiva University will publish The Koren Yizkor: Memory and Meaning, an unprecedented double-sided volume that includes the complete Yizkor text (the memorial prayer for the departed), tefillot (prayers) for the cemetery, Kaddish and other relevant tefillot, as well as a the collection of essays by YU Chancellor Rabbi Dr. Norman Lamm on themes of memory and meaning.  Rabbi Lord Jonathan Sacks, the Kressel and Ephrat Family University Professor of Jewish Thought at Yeshiva University, completes the work with a beautiful English translation and eloquent preface. 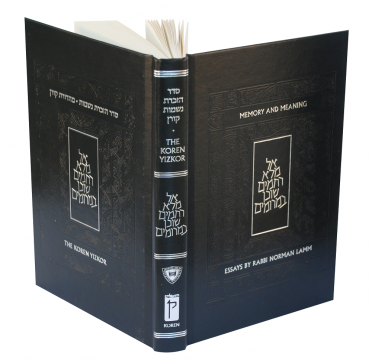 The volume is sponsored by the Michael Scharf Publication Trust of Yeshiva University Press and is scheduled for release by Koren Publisher Jerusalem on March 14, 2016.

“There is the specific Jewish way of remembering,” wrote Rabbi Sacks in the book’s preface. “Most cultures’ memories are about the past, but whenever the word Yizkor is mentioned in the Torah, it refers not to the past, but to the present and to renewal. In each case it was about the future, not about the past.”

“That is what Yizkor is: memory as a religious act of thanksgiving for a life that was, and that still sends its echoes and reverberations into the life that is,” he added.  “For when Jews remember, they do so for the future, the place where, if we are faithful to it, the past never dies.”

In his introduction to the Yom Kippur section, Rabbi Lamm writes that Yizkor reminds us that every person, whether large or small in stature, influences the world or some part of it in profound and important ways.

“Do not imagine that only the great and dramatic events are significant. In the eyes of God and in the eyes of history, we too are important if we but do all we can. For nobody is a nobody, and everybody is a somebody. We influence our children, or others’ children. And they, in turn, will influence others. The fact that we are here today is a tribute to them; had one link in the chain of generations been severed, we would not be here today. We must, then, watch our step.”

The Koren Yizkor: Memory and Meaning is the newest addition to the growing list of innovative and substantial joint projects undertaken by YU and Koren Publishers Jerusalem.  Over the last six years, the partnership has released a 20th anniversary edition of Rabbi Lamm’s masterwork, Torah Umadda; the Derashot LeDorot series, a selection of essays based on the weekly sermons delivered by Rabbi Lamm early in his rabbinical career; The Philosophical Quest of Philosophy, Ethics, Law and Halakhah, a collection of essays by Rabbi J. David Bleich, Herbert and Florence Tenzer Professor of Jewish Law and Ethics, on a variety of topics relating to Jewish philosophical thought; a multi-volume set on topics of contemporary Jewish law, authored by YU’s Roshei Yeshiva; and four volumes of the Mitokh Ha-Ohel series, a collection of original essays on the parashiyot (weekly Torah portions), haftarot (weekly selections from the books of the Prophets) and prayers for the weekday and Shabbat authored by rabbis and professors from every division of YU.