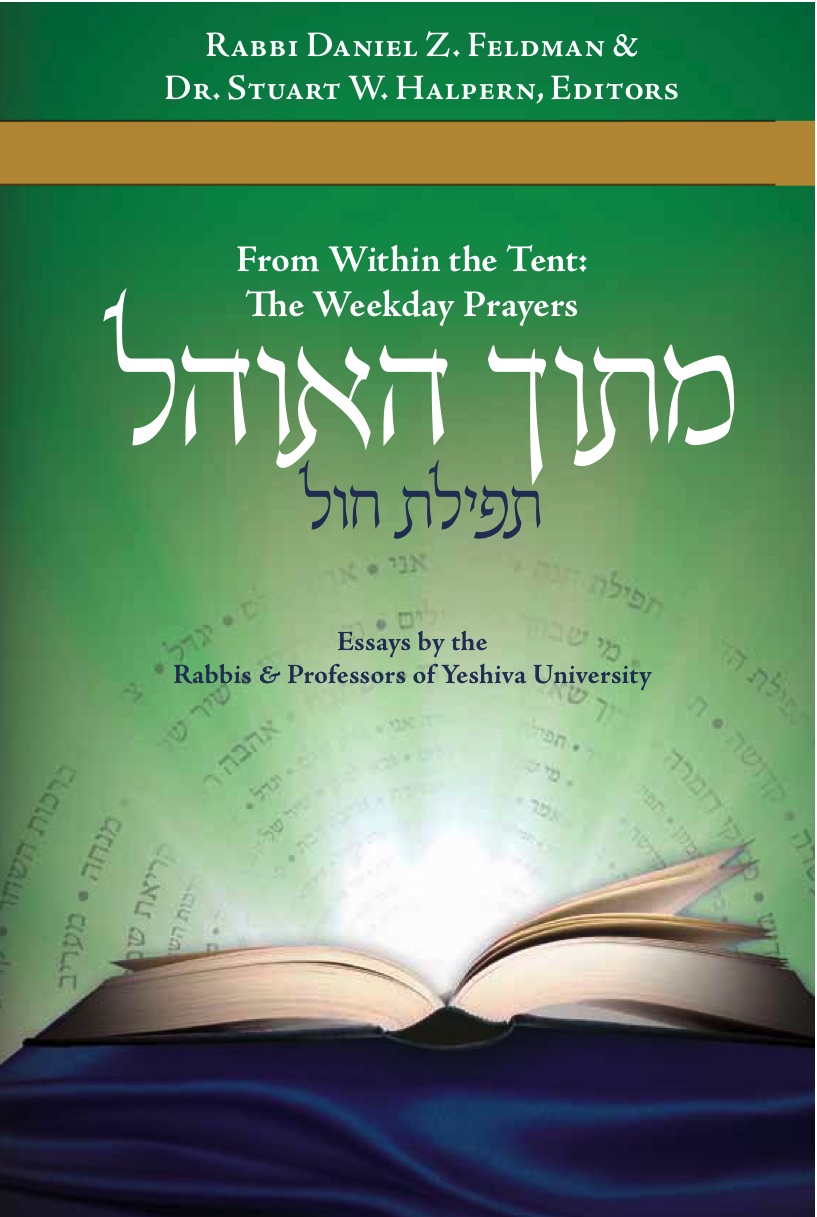 A third book in the Mitokh Ha-Ohel series featuring collections of essays by Yeshiva University faculty is being released this week. The first of a three-volume series on prayer, From Within the Tent: Essays on the Weekday Prayers from the Rabbis and Professors of Yeshiva University (The Michael Scharf Publication Trust of RIETS/Yeshiva University Press and Koren Publishers, 2014) is a compilation of writings from over three dozen YU faculty members — including Roshei Yeshiva, deans and professors — who draw upon a range of diverse sources to help readers gain a better understanding of the weekday prayers.

The book was edited by YU Rosh Yeshiva Rabbi Daniel Z. Feldman, who is also a professor at Sy Syms School of Business and executive editor of YU Press, and Dr. Stuart W. Halpern, who serves as an academic advisor on YU’s Wilf campus, assistant director of the Straus Center for Torah and Western Thought and assistant director of Student Programming and Community Outreach at the Bernard Revel Graduate School of Jewish Studies.

For Halpern, the release marks a personal milestone, as this is the 10th book he has edited for YU Press over the last five years.

“It’s an honor to play a role in disseminating the teachings of YU rebbeim and faculty to the greater community,” said Halpern, who earned a master’s degree from Revel and a doctorate from the Azrieli Graduate School of Jewish Education and Administration. “Each book is a labor of love, and I am extremely appreciative of the positive reaction these volumes have elicited both within Yeshiva, as well as from readers across the world. People have told me they’ve seen these books in the Oxford library, seforim [book] stores in Australia, and of course, all over the United States and Israel. It’s really amazing to know I’ve been able to help spread the Torah of Yeshiva University to so many.”

Halpern first got involved in YU Press in 2009, when he came up with the idea to produce a volume collecting original essays on the weekly Torah portion from faculty across the University. “After a trip to Israel, I noticed a couple of projects of this type that had been done there, and it seemed like a no-brainer to undertake such a project at Yeshiva,” he said. “YU and RIETS Press’ Dr. Jeffrey Gurock and Rabbi Feldman were very supportive of the endeavor, and everyone liked the name I came up with – Mitokh Ha-Ohel­: From Within the Tent, so named because President Richard Joel often speaks about the plurality of voices at Yeshiva that fit within our ‘big tent.’”

After the first volume was released in 2010, Halpern was encouraged to undertake a sequel on the haftarot, and he completed that as well, incorporating over 72 original contributions. Some of his other edited works include Lexical Studies in the Bible and Ancient Near Eastern Inscriptions: The Collected Essays of Hayim Tawil (KTAV and YU Press, 2012); The Azrieli Papers Volume II: Commonplaces, Uncommon Research (KTAV and YU Press, 2013); and five volumes of Rabbi Dr. Norman Lamm’s Derashot LeDorot series, a commentary on the five books of the Torah.

A launch event for the new Mitokh Ha-Ohel volume is planned for September 14 at the Abraham Arbesfeld Kollel Yom Rishon and Millie Arbesfeld Midreshet Yom Rishon program, which will feature Rabbi Lord Jonathan Sacks as the keynote speaker.