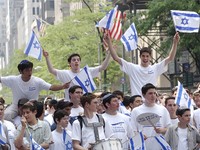 May 24, 2004 — Hundreds of YU students, alumni, faculty, and friends marched up Fifth Avenue in Manhattan Sunday in the annual Salute to Israel Parade.

Estimates put YU’s participation at around 700, which included representatives from the university’s undergraduate and graduate schools and affiliated high schools.

The parade saluted the 56th anniversary of Israel’s independence.