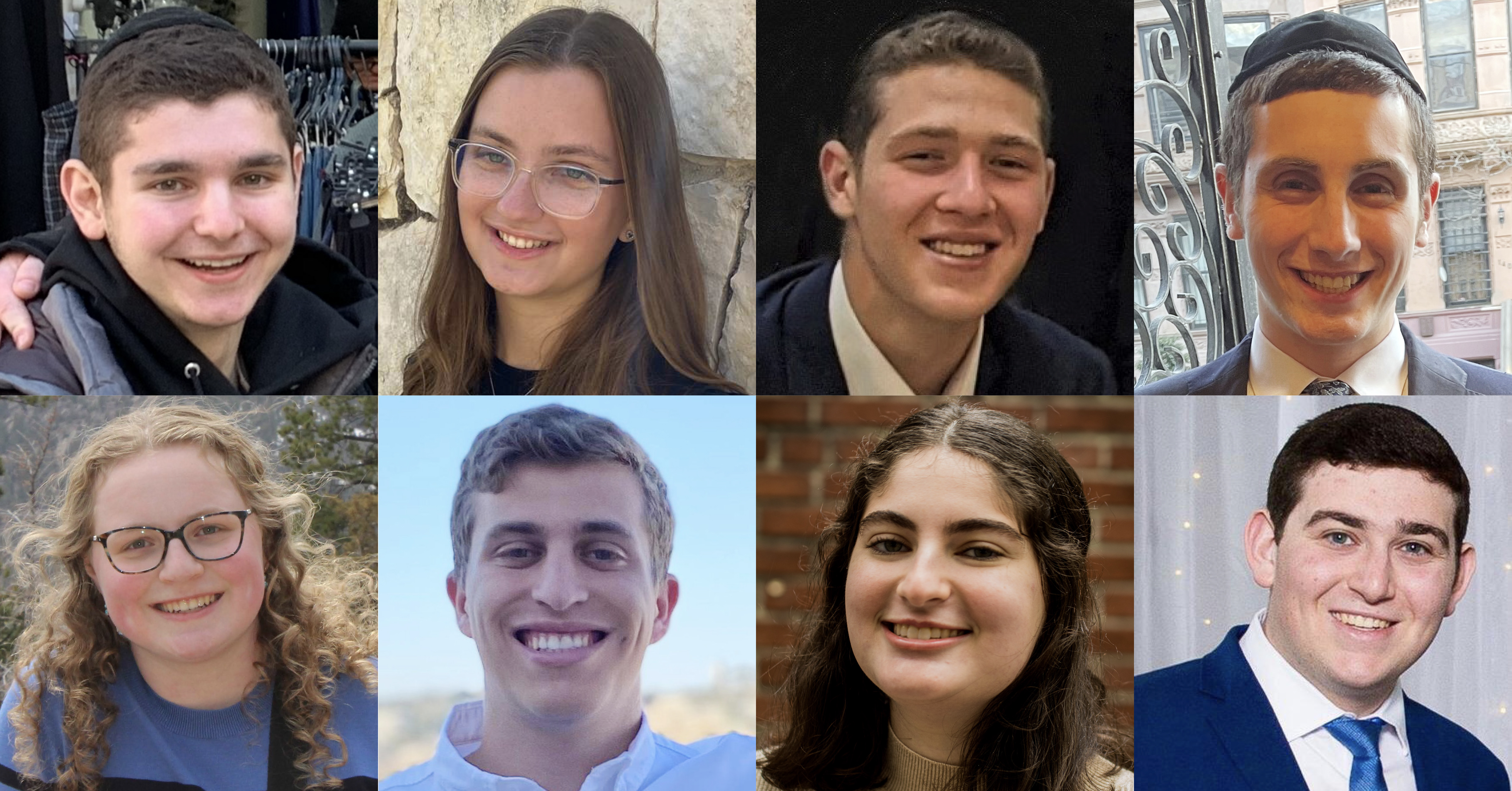 The Zahava and Moshael Straus Center for Torah and Western Thought is proud to announce the incoming class of Straus Scholars who will form the sixth cohort of the Straus Scholars Program. Chosen from among Yeshiva University’s incoming class of undergraduate students in Stern College for Women and Yeshiva College, these exceptionally gifted undergraduate women and men demonstrated high academic achievement, leadership potential, and commitment to studying the great works of the Jewish and Western traditions.

“We received a record number of applications for the 2022 Straus recruitment cycle, and we were particularly impressed with the intellectual accomplishments and leadership experience of this incoming cohort,” explained Sarah Wapner, the Straus Center’s impact and recruitment officer. “We look forward to welcoming the sixth cohort of Straus Scholars this coming fall, and we are confident that they will quickly make a significant impact on YU’s campus and beyond.” 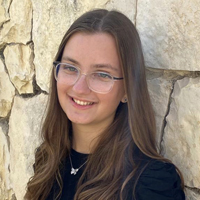 Dassi Mayerfeld grew up in Teaneck, New Jersey, and graduated from Manhattan High School for Girls (MHS) in 2021. She served as the editor-in-chief of Eastward, Manhattan High School’s literary and art journal, and as a behavioral shadow at the Friendship Circle, interned in a biochemistry lab at Cornell University, competed in the ISACA Cybersecurity Competition, and submitted writing and artwork regularly to MHS publications, many of which were recognized by the New York Times and the Scholastic Art & Writing Awards. After graduating from MHS in 2021, she spent a year at Michlalah in Jerusalem, where she focused on the in-depth study of Tanach, Halakha, and Hashkafa. This coming summer, Mayerfeld will be interning at a Cornell University Alzheimer’s research lab at NewYork-Presbyterian Hospital. As a Straus Scholar at Yeshiva University, Mayerfeld hopes to pursue a major in biology with a minor in studio art. On campus, she looks forward to working with children with special needs through extracurricular programming, while pursuing her interests in poetry and drumming. “I look forward to studying halakhic and hashkafik ideals and using them to deepen my understanding of Western thought and modern society,” said Mayerfeld. “I hope to explore these topics through the courses and extracurricular opportunities the Straus program provides.” 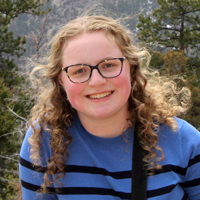 Jenny Rapp grew up in Washington Heights, Manhattan. She attended Manhattan High School for Girls (MHS), where she participated in the math, chess, and drama clubs, served as senior editor of the literary and art journal, interned for the Intermountain Jewish News and 12 Mile Stables, and received recognition from the Ulpaniada and American Mathematics Competitions (AMC). Rapp is a member of the Arista honors society and a National Hispanic Recognition Program Scholar. Upon graduating from MHS in 2021, Rapp studied at Michalah in Jerusalem. As a Straus Scholar at Yeshiva University, Rapp hopes to pursue her interests in STEM in conjunction with her studies at the Straus Center. “I look forward to exploring the ways in which the STEM fields can be used to further humanitarian aims, guided by a Torah perspective and viewed in tandem with Western philosophy,” she explained. 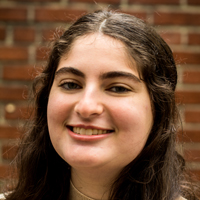 Meira Entin grew up in South Florida and attended Hadar High School for Girls. At Hadar, Entin was involved in several extracurricular activities, serving on the Chesed Committee, the Hadar Israel Policy Affairs Committee, and attending AIPAC Policy Conferences in Washington, D.C. In her senior year, she served as the artistic editor for her grade’s yearbook. After graduating from Hadar, Entin studied at Michlelet Mevaseret Yerushalayim (MMY) in Jerusalem for a year and a half. While in Israel, Entin volunteered with both Friendship Circle and Darkaynu, working closely with special-needs children and young adults. In past summers, Entin did freelance work in graphic design and worked on the HASC media team as a photographer. Now at Stern College, Entin is pursuing a degree in art, humanities, and psychology and is passionate about increasing mental health awareness and support. She serves as a board member of the Stern College Food for Thought Club, which aims to decrease food waste on campus while helping the local homeless population, and writes for The Observer. “The Straus Scholars Program will provide me with a valuable opportunity to focus on the interplay between Jewish and Western thought, and the interplay between Jewish values and law,” Entin explained. 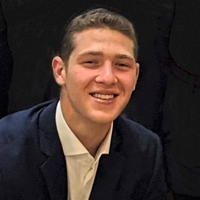 Ezra Seplowitz grew up in Teaneck, New Jersey, and attended Torah Academy of Bergen County (TABC). At TABC, Seplowitz served as the president of the Israel Advocacy Club and was editor-in-chief of Kol Torah and TABC’s Israel Report. He served twice on student council and captained both the TABC track and hockey teams. Seplowitz was a fellow in Write On For Israel, a two-year leadership and education program for Jewish high school students, and was invited to attend the AIPAC Schusterman High School Summit in 2018. Seplowitz graduated from TABC in 2020 as a member of the National Honor Society, the recipient of the school’s leadership award and Yeshiva University’s Torah U’Maddah award. He studied at Yeshivat Sha’alvim for two years and recently spent a summer in Rav Meir Goldwicht’s kollel at Camp Mesorah. As a Straus Scholar at Yeshiva University, Seplowitz hopes to pursue a dual degree in philosophy and psychology, and he hopes to join YUPAC and YU’s roller hockey team. “I’m looking forward to broadening my connection with Yahadut [Judaism] through historical and philosophical study in the Straus courses, as well as developing meaningful relationships with the staff and members of my Straus cohort,” said Seplowitz. 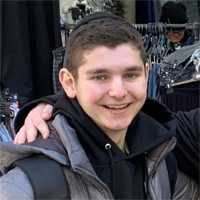 Yinon Gurvich was born and raised in Chicago, Illinois, where he attended Ida Crown Jewish Academy (ICJA). At ICJA, he participated in Model UN and co-founded the school’s Chess Club. Gurvich was a member of the ICJA wrestling team, winning the Wittenberg Invitational Tournament and the Most Outstanding Wrestler award in his junior year. Upon graduating from ICJA in 2021, Gurvich spent a year studying at Yeshivat Sha’alvim in Israel. As a Straus Scholar at Yeshiva University, Gurvich hopes to pursue a dual degree in mathematics and finance, with an additional focus on the humanities in the Straus Scholars Program. “As a Straus Scholar, I aim to harness my intellectual interests in Jewish thought and political science and participate in related extracurricular activities and programs. I’m grateful to be a part of this incoming cohort of Straus Scholar, and I look forward to getting to know this wonderful group,” he said. 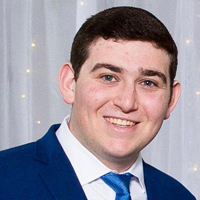 Yaakov Willner grew up in Los Angeles and attended YULA High School. While in high school, Willner interned at StandWithUs, where he helped develop an online curriculum for middle school students on topics of Israel education, and served as a counselor at Etta Israel, an organization servicing individuals with mental and developmental disabilities. Additionally, he wrote and was an editor for multiple publications, including Kol Hanearim, Polymatheus Journal, and Likutei Ohr, and played clarinet in YULA’s jazz ensemble. Upon graduation, he received the Excellence in Torah Award and was featured in the LA Jewish Journal. During his summers, Willner attended NCSY Kollel in Israel and was a member of Beth Jacob Congegration’s Summer Kollel in Los Angeles. Upon graduating from YULA in 2020, Willner spent two years in Israel studying at Yeshivat Kerem B’Yavneh (KBY), where he sang in the yeshiva’s choir. He also took seminars through Tikvah Online Academy on Jewish ideas, Zionism, and Western civilization. As a Straus Scholar at Yeshiva University, Willner plans to pursue a degree in economics and political science while engaging in serious Torah study. “I look forward to joining the Straus Scholars Program, where I hope to explore the impact of Torah values on modern Zionism and American history,” he said. 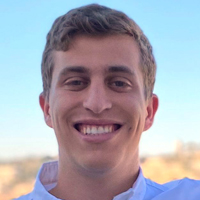 Joshua Shapiro grew up in West Orange, New Jersey, and attended Rae Kushner Yeshiva High School in Livingston. At Kushner, Shapiro was captain of the varsity basketball and baseball teams, senior editor of the school newspaper, and the commencement ceremony student speaker.  In recent summers, Shapiro worked as a counselor at Camp Moshava, Indian Orchard. Shapiro spent the last two years studying in Israel at Yeshivat Orayta, where he founded and managed the Orayta Food Bank and participated in the Tikvah Overseas Student Institute. Now a Straus Scholar at Yeshiva University in the Post-Pesach Program, Shapiro hopes to pursue a degree in history and English. He enjoys studying Tanach and writes for The Commentator. “I greatly enjoy reading about and discussing Jewish and universal values, and I’m excited to continue these conversations through the lenses of religious thought and American history in the Straus Scholars Program,” Shapiro explained. 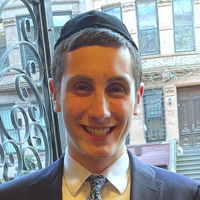 Aharon Soloveichik attended high school at Yeshiva Shaar Hatorah in Queens, New York, and, after graduating, the Shaar HaTorah Beis Medrash. In high school, he focused his studies on Talmud Torah (the study of the Hebrew Bible, its commentaries, and related texts), American political thought, and military history, and completed an internship at the Roosevelt House Public Policy Institute. After studying at the Shaar HaTorah Beis Medrash, Soloveichik spent a year in Israel at Yeshivat Kerem B’Yavneh. As a Straus Scholar at Yeshiva University, Soloveichik hopes to pursue a degree in history, war studies, and political science, while attending the shiur of Rav Hershel Schachter in the Mazer Yeshiva Program (MYP). “As a Straus Scholar in the Straus Scholars Program, I look forward to studying some of the most important works in history through the lens of the Torah,” said Soloveichik. “I hope to achieve a better understanding of how we as Jews can continue to impact the world in a significant way as we have in the past.”

To learn more about the Straus Scholars Program, click here.