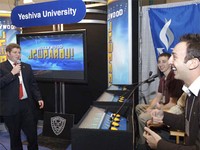 Delegates thronged to the YU booth. Fifty-five YU students participated in the GA, the largest gathering of Jewish professional and lay leaders sponsored by the United Jewish Communities, and engaged delegates as they walked the floor of the exhibition hall, attended sessions and recruited players to test their Jewish IQ with Jewpardy.

“Jewpardy” is a parody of the popular quiz show, “Jeopardy,” which poses questions covering topics ranging from Jewish recipes to Jewish geniuses, Biblical figures to comedians, on a mock set with the familiar jingle playing in the background.

“Our students’ presence at the GA is a wonderful opportunity for our students to see the larger Jewish world and realize that they can matter,” said President Joel. “The GA is a house of Israel, and here you can learn that you can make a difference,” he told the students. “Your experience at the GA can help you decide whether you wish to be klei kodesh or lay kodesh.”

President Joel participated in a plenary on “The Jewish Future: Where We Are as a People,” the only plenary at the GA that addressed global Jewish issues. The other sessions examined Israel-related themes.

On the first day of the GA, the YU students –– including 10 Presidential Fellows –– took part in “Just for a Day” sponsored by Hillel. They worked at a food bank for the better part of the day and helped package meals for indigent LA residents. “It was great meeting other students from around the country and to show that we are committed to helping the larger community,” said Shuey Jacoby, the Jesselson Family Presidential Fellow.

Yeshiva University Center for the Jewish Future (CJF) hosted a Lunch and Learn session at which CJF Dean Rabbi Kenneth Brander led a discussion on “Sustaining Community in a Culture that Celebrates Individuality.” President Joel spoke informally to the students and enthusiastically thanked them for making him proud.

“It is inspiring to see so many Jewish leaders who truly care about the state of the worldwide Jewish community,” said Barrie Zigman, the Roland E. Arnall Presidential Fellow. “I feel optimistic that despite the differences between all factions of Judaism, we’ll continue to work together to accomplish a larger goal of unity and commitment to our religion.”

Esther Birnbaum, president of the Sy Syms School of Business Student Council, was also inspired by her experience. “The GA woke us up to the realization of the great achievements accomplished by the commitment of all the Jewish entities to a greater cause and the responsibility each of us has to take part in that.”