Yeshiva University-affiliated Rabbi Isaac Elchanan Rabbinical Theological Seminary (RIETS) will be launching its English-language hashkafah [Jewish philosophy] series with the publication of Rabbi J. David Bleich’s work, The Philosophical Quest of Philosophy, Ethics, Law and Halakhah, a collection of essays on a variety of topics relating to Jewish philosophical thought. 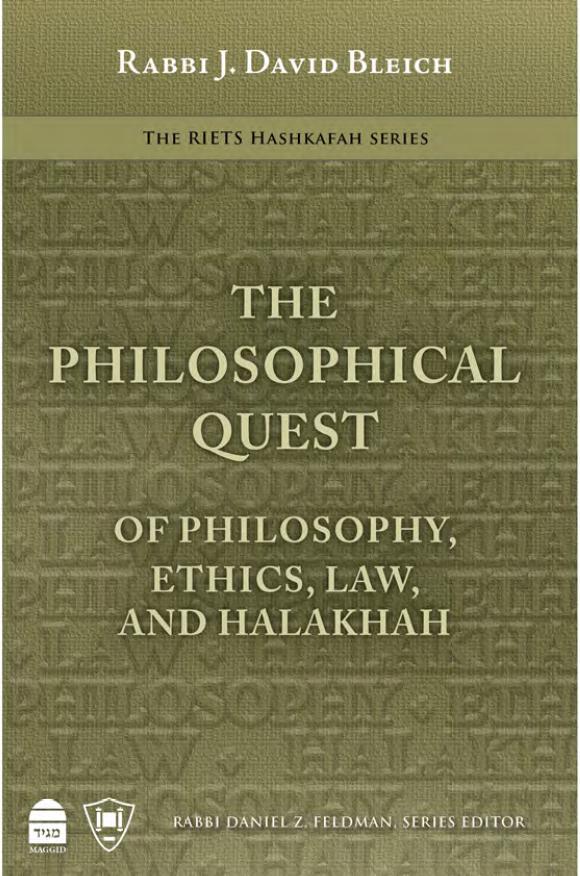 The volume, sponsored by the Michael Scharf Publication Trust of Yeshiva University Press, is scheduled for release by Maggid Books, an imprint of Koren Publishers Jerusalem, on December 16, 2013.

In the author’s preface, Rabbi Bleich, who serves as a Rosh Yeshiva and the Rosh Kollel Le-Hora’ah at RIETS, professor of law at the Benjamin N. Cardozo School of Law, and Herbert and Florence Tenzer Professor of Law and Ethics at Yeshiva University, explains that the essays run the gamut, highlighting the different value-driven principles of faith that define the essence of Jewish belief, philosophical concepts reflected in the halachic system, Jewish responsibilities in a non-Jewish society as well as ethical values as they relate to resolution of societal problems.

“Rabbi Bleich is recognized as an international authority in both Jewish law and Jewish thought, and our students are privileged to be the beneficiaries of his wisdom and erudition,” said Rabbi Yona Reiss, RIETS Rosh Yeshiva and the director of the RIETS Press. “We are exceedingly grateful to Rabbi Bleich for sharing his first rate scholarship in Jewish philosophy with the broader community. It is our hope that his clear and cogent manner of presentation will edify scholars and laypeople alike.”

The RIETS Hashkafah Series will include several volumes authored by RIETS Roshei Yeshiva that will present detailed and sophisticated analysis and elucidation of the principles of Jewish belief.

“The practice of Judaism is premised upon its foundational creeds, and the belief system of Judaism is given an audible voice through the observance of the commandments of the Torah. It is a fitting expression of Yeshiva University’s mission that with the inauguration of this new series, we now present multi-volume expressions of studies of both realms in tandem,” said Rabbi Daniel Z. Feldman, executive editor of the RIETS Press.

The RIETS Hashkafah Series is the newest addition to the growing list of innovative and substantial joint projects undertaken by Yeshiva University and Koren Publishers Jerusalem. Over the last three years, the partnership has released a 20th anniversary edition of Rabbi Dr. Norman Lamm’s masterwork, Torah Umadda; the first volume of Rabbi Lamm’s Derashot LeDorot series; a multi-volume set on topics of contemporary Jewish law, authored by Yeshiva University’s Roshei Yeshiva; and two volumes of the Mitokh Ha-Ohel series, a collection of original essays on the parashiyot [weekly Torah portions] and haftarot [weekly selections from the books of the Prophets] authored by rabbis and professors from every division of Yeshiva University.

The next volume of the contemporary Jewish law series is due out in early 2014, and additional volumes of the RIETS Hashkafah Series are scheduled to follow in late 2014.