A dinner on February 25 will celebrate the 10th anniversary of Yeshiva University Torah Mitzion Kollel of Chicago. The dinner, one of two annual fundraising events the Kollel hosts, will honor the work that Rabbi Reuven Brand ’02YC, ’05R, ’06A, the founding Rosh Kollel, and his wife, Dr. Nechama Brand ’03SB, have done over the past decade to put what is known as the “Beit Midrash Without Walls” on a sound financial footing and extend its outreach into the Jewish communities of Chicago.

The Kollel began in 2008 as a collaboration between Chicago’s Jewish community and Yeshiva University to create a YU “satellite” in the Midwest to serve the religious and educational needs of the community, according to Rabbi Ari Sytner, director of community initiatives at Yeshiva University’s Center for the Jewish Future (CJF). Rabbi Brand serves as the liaison between CJF and the Kollel. While the Kollel uses “Yeshiva University” in its name, it is a separate non-profit organization.

At the heart of the Kollel, described as “an open community of learning,” are the Fellows, eight full-time American and Israeli Torah scholars who engage in an intensive study of Talmud, Jewish law and Jewish thought. “The Kollel,” explained Rabbi Brand, “is a continuation of the rabbinic training for students from the Rabbi Isaac Elchanan Theological Seminary (RIETS). They get credit from RIETS for their work in the Kollel towards their ordination requirements, and the department of community services at CJF provides the Kollel with a lot of support through in-kind services and in-service training.”

As part of their work in the Kollel, the Fellows also teach in the many community education programs the Kollel offers. These programs are designed, according to the Kollel’s mission, to “enrich and engage the greater Chicago community with inspired Torah living and learning” as well as to promote “the importance of positive interaction with general society and culture and the religious significance of the State of Israel.”

The reach and frequency of these programs are extensive, as Laurie Hasten, a current Kollel board member, pointed out. “Every week,” she said, “there are multiple opportunities to delve into text with a community of learners, whether it’s for adults in Jewish Learning Together, the kids with Parsha and Pizza, Girls Night Out for Learning (for high school girls) as well as a junior version for middle schoolers: there are so many niches within the community that the Kollel is able to fill.”

Daniella Schwartz, described by Rabbi Brand as the Kollel’s “PR czar,” documented just how busy the Kollel is on any given week.  “I make sure that all events and programs are known to the community—I send out emails, I post in local newspapers, such as the Chicago Jewish Home, where we post biweekly articles with pictures to show the community what we’re doing. We’re on Facebook and Instagram and we post flyers in all the shuls. Our programming is jam-packed because we try to have something for everybody, so this means we have to keep everybody informed.”

The Kollel is “without walls” because it brings its programs into different venues rather requiring participants to come to a central location. “We have the ability,” said Rabbi Brand, “to provide classes and one-on-one learning that adds value to community institutions. Instead of telling people, ‘Leave your shul and go to another brick-and-mortar location,’ we’re going to bring the class to the shul. We’re augmenting and strengthening the existing institutions and bringing them together through this web of programs.”

Because of this approach, “people have become more engaged in the Kollel—an increasing number of donors, an increase in funding year after year—because people see the value added to their community and their institutions. Everything we do is done somewhere where the people are—in the schools, in the classrooms, in different shuls and in peoples’ homes. It creates a model where we’re bringing the Torah and its values to people.”

Brian Levinson ’91YC, a current board member, agrees with Rabbi Brand.  “There were some organizations doing some of that prior to the Kollel, but the Kollel does this at every level—age-wise, from grammar school kids to senior citizens; settings, whether it’s a structured synagogue, beit midrash, public library, coffee shop; and catering equally to men and women at very high levels of scholarship. This combination is very, very unique.

However, despite 10 years of vigorous and vibrant Torah learning brought to hundreds of people and venues, “there are 300,000 Jews in Chicago, and we haven’t touched all of them yet,” said Rabbi Brand.

So, to extend the program’s outreach, the Kollel began two initiatives, NILI (Nashim Lomdot Yachad, or Women Learning Together), the Chicago Institute of Women’s Learning, and the Midwest Center for Jewish Learning (MCJL). 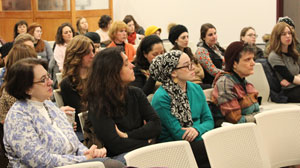 Under the direction of Lynn Kraft, NILI describes itself as “a community of learning offering engaging, challenging and inspirational Torah-based classes and programs tailored to the specific needs and interests of women.” NILI does this by using the Kollel resources and partnering with local and visiting scholars to offer a study of Torah that “enables women to develop and enhance their Jewish lives, celebrating a commitment to halacha [Jewish law] and tradition that includes an appreciation of general society and religious significance of the State of Israel.”

One of the crucial services NILI offers is the NILI Hotline. Women can contact the hotline by phone, email or a web-based form, and trained kallah [bridal] teachers will connect them to confidential and anonymous halachic guidance from rabbis in all areas of Taharat Hamishpacha [Jewish family purity/Mikvah]. Hasten is especially impressed by what the hotline offers women “from all over the country who call in for advice and counsel; it impacts so many lives in a positive way, and by their own count, I’m told the number of contacts each month is growing.”

MCJL’s mission is to bring “inspired Jewish living and learning to the greater Chicagoland Jewish community through a variety of learning opportunities, programs and resources for individuals and families of all backgrounds.” One example is Jewish Learning Together (JLT), led by Rabbi Yakov Danishefsky ’14YC, ’15BR, ’16R and a graduate of the Wexner Graduate Fellowship. JLT pairs men and women with differing Jewish backgrounds with lessons from Torah and Talmudic passages in a chavruta [learning partner] setting. The goal is to stimulate friendly thought and discussion, and for the pairs to end the evening knowing a little more about Torah, themselves and their partners than they knew at the beginning.

Gary Hoberman, who had been president of the Kollel board for six years and who continues to serve as a board member as well as a mentor to Rabbi Yaakov Frankiel, the new executive director, sees the MCJL as an excellent effort not only “to reach out beyond the usual giving circles” but also to complement the Kollel’s goal of “putting Chicago on the Modern Orthodox map, as a destination where one can go and have a strong belief in God, a commitment to Torah and community, and do it under the auspices of a Modern Orthodox philosophy.”

In these and so many other ways, the Kollel is slowly fulfilling Rabbi Brand’s vision of transforming the Jewish community in Chicago. He measures the transformation already brought by the Kollel in part by the way people have said to him that,“the community is not the same as it was 10 years ago” and by the way “people have become engaged in the world of learning based upon a centrist religious Zionist philosophy that is now a proud and celebrated vision in our community, strong and thriving.”

Hoberman would agree. “A primary goal of the Kollel is to attract young Modern Orthodox rabbis to Chicago to develop their teaching skills as fellows and then have them stay in Chicago with their families, grow in Chicago and take positions in the community, particularly in our institutions, and become role models for our children. And that’s exactly what’s been happening over the past 10 years.”

Levinson added that “the accessibility of Torah and Torah scholarship in classes and informal and formal opportunities to connect with Judaism has absolutely changed the community. It’s made us a better community, a stronger community, and I think it’s given us a stronger footing for our kids for when they go off to Israel and to college.” Lennie Weiss, who has served on the board for the last eight years and was co-president for three years, concurred, saying that the Kollel has “a tremendous impact on all aspects of the Chicago community, especially a tremendous impact on our kids with its positive approach to learning and halacha.”

And the next 10 years? “We have a lot of things to do,” Brand said. “We’re looking to grow organically, we’re looking to grow NILI and MCJL, and we want to strengthen the local programming that we have. Strengthening, improving and innovating: that’s our work for the next decade.”

Levinson has every faith that Rabbi Brand’s vision will come to pass. “While there are many outstanding lay leaders who have contributed time and money to support the Kollel,” he noted, “this dinner honors the Brands for who for 10 years have been the absolute force on the ground making YU Kollel the positive influence it is today.”