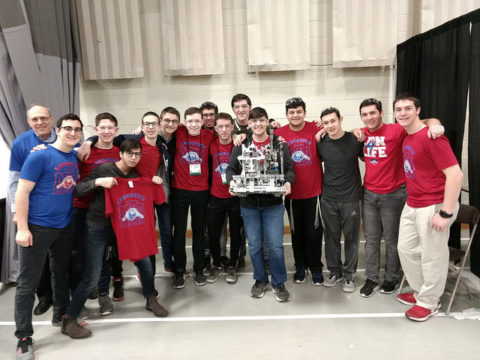 The competition was held at Scranton University in Scranton, Pennsylvania from Friday, March 16th through Sunday, March 18th. As the event overlapped with Shabbos, the team was faced with the dilemma of being unable to participate in rounds that took place on Saturday, March 17th. Lionotics 2, with the help of YUHSB administrators and Yeshiva University’s Department of Legal Affairs, worked closely with FIRST representatives to reach a resolution that would enable the team to participate in the competition without compromising their religious observances.

“Our team worked tirelessly to advance to this level of the FIRST Tech Challenge competition,” said YUHSB Head of School Rabbi Joshua Kahn. “We are grateful to FIRST for promoting cultural diversity and making the accommodations necessary to enable our team to compete.”

While other competing teams played their matches over the course of three days, Lionotics 2 played all nine of their matches back-to-back on Sunday, leaving no time to strategize or make required improvements and repairs to their robot.  Lionotics 2 was created this year to make room for students who wanted to join YUHSB’s robotics team, Lionotics, which was already full. Despite this being the team’s inaugural year, they surpassed the pre-existing YUHSB team in the FIRST Tech Challenge and won the NYC Championship to qualify for this event. 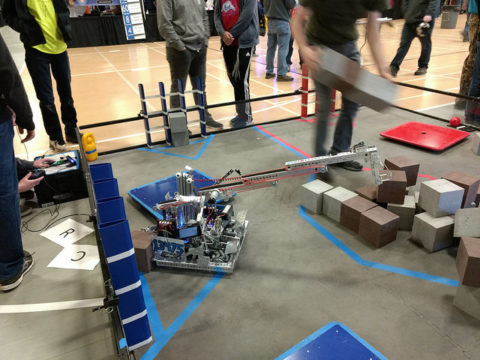 As a rookie team with little to no competition experience, Lionotics 2 embraced the challenge of competing in consecutive rounds despite the disadvantage it presented.  “As soon as we met the boys we knew they had the passion for robotics, but more important, a thirst for learning and experiencing new challenges such as this competition,” said Tom Zawislak and Dave Hackett of Pennsylvania FIRST Robotics, the East Super Regional hosts who were instrumental in making the accommodations necessary for the team to compete. “We were thrilled to see them engage with so many other teams and create fun for themselves and share their fun with others. They truly came ready to play and were competitive on the field throughout all of their matches.  Very impressive performance by a rookie team!”

“Thanks to our experience at this competition, we now have a better understanding of what we need to do to win at such a high level,” said student Elishama Marmon.  “We are working on improving the team and hope to advance to the World Championship next year.”