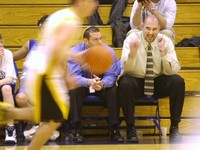 New York, NY, Mar 18, 2004 — Fourth-seeded YULA sat in the stands at the Max Stern Athletic Center and watched as #3 Hyman Brand ran away with their contest by defeating its opponent by 40 points – and then YULA took the court and proceeded to beat its opponent, #13 Beren (Houston), by 50 points. The final score was 72-22.
Red Sarachek Basketball
Tournament Web Site

YULA held Houston star Chaim Perl to just 6 points en route to the biggest romp in recent Sarachek History. The Panthers showed just why they have been more successful in this tournament than any other school. They played an aggressive, swarming defense, and a fast paced, fundamental offense that fully utilized their natural athletic advantage. Even after removing the starters in favor of the bench, the YULA squad never missed a beat – in a sign of great coaching, each player was able to substitute flawlessly for their respective starters.

YULA might have opened themselves to criticism when they continued to shoot three-pointers and run-up the score long after the game was out of reach. In one telling moment late in the fourth quarter, a YULA guard made a three-point basket early in the offensive possession – advancing the Panther lead to 50 points.

After this loss, Beren might find itself sliding down in the rankings after the teams are re-seeded tonight. Beren plays tomorrow at TABC – the game will not be broadcast on MacsLive.com. YULA will play in the Tier I quarterfinals tomorrow at the Max Stern Athletic Center between 9:30 AM and 2:00 PM. That game will be broadcast live on www.macslive.com.