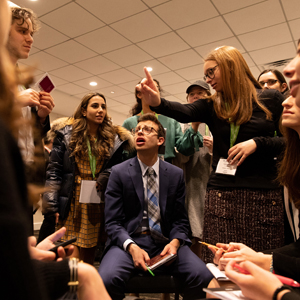 An intense academic competition with an intense international focus, Yeshiva University’s Model United Nations competition (YUNMUN) kicked off its 29th straight year on February 10-12, 2019, at the Stamford Plaza Hotel and Conference Center in Stamford, Connecticut, to participate in what Marc Zharnest, a YUNMUN adviser, described as the “largest Jewish academic competition of its kind. There is really nothing like this.” (In addition to being a YUNMUN adviser, Zharnest is also coach of the soccer team at Torah Academy of Bergen County and head coach of the YU women’s soccer team.)

The 420 student delegates came from 49 yeshiva high schools and community day schools from across the United States, Canada, Brazil and South Africa. Additionally, 75 YU undergraduates were on hand to provide organizational support.

The event, which simulates the format of the United Nations, is designed to broaden the global perspective of participants by having them play the role of UN delegates. Student delegates are assigned countries and appointed to one of 16 committees dealing with a specific global issue, such as reducing food waste, disrupting terrorist financing and preserving endangered languages, to name a few.

To ensure that their countries’ interests and policies were effectively presented, these newly-minted UN diplomats were required to conduct extensive research beforehand. The result: a better understanding of the many controversies roiling a fast-changing world.

In the words of Malkie Goldschmidt, a program adviser and teacher at North Shore Hebrew Academy High School in Great Neck, New York, “YUNMUN gives students an opportunity to develop some really important skills like public speaking and networking.” First-time attendee Eliana Raska from Berman Hebrew Academy in Rockville, Maryland, was impressed by the caliber of her fellow delegates, noting that she “met a lot of people who think deeply and philosophically about the world,” a quality which Azi Fine ’19YC, who served as this year’s YUNMUN Secretary General, hopes YUNMUN will cultivate and nurture. “Building a legacy impact means growing ourselves personally, spiritually and interpersonally so that, in the long term, the delegation of YUNMUN 29 will have an impact on the world.”

See a video recap of the YUNMUN conference here. 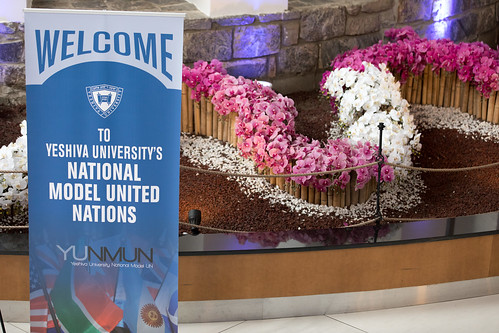