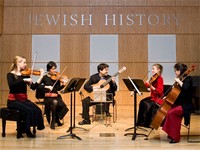 Apr 5, 2008 — Momenta String Quartet, the first ensemble-in-residence at Yeshiva University, performed the world premiere of composer David Glaser’s Kinesis at a concert at the Yeshiva University Museum on Wednesday, April 2, 2008. Glaser is associate professor of music at Stern College for Women.

Celebrated for its eclectic programming, the Momenta Quartet includes members Annaliesa Place and Miranda Cuckson, both on violin, Joanne Lin on cello, and Stephanie Griffin on viola. The quartet is spending a year each at both the Beren and Wilf campuses, where they give readings of works composed by music majors in the schools’ composition classes, and perform and answer students’ questions in music classes.

Glaser’s piece was written especially for the members of the quartet and guest artist Oren Fader on guitar.

“As with most of my recent music, the structure of Kinesis is shaped by the particular sonic characteristics of the ensemble for which it was written,” Glaser said.

“I usually try to find the common ground among the instruments in order to create a unified ensemble. There are times in this piece where the members of the quartet defer to the guitar, using various types of pizzicato, or where a gesture is shared by all the instruments. But as often as not the quartet and guitar are treated as distinct entities.”

Glaser was recently selected by the Fromm Music Foundation at Harvard University to receive a 2007 Fromm Commission Award, with a prize of $10,000. In 2005, he won an award from the American Academy of Arts and Letters for his body of work.