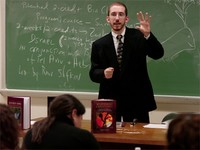 His afternoon discussion, “Zoo Torah: Jewish Perspectives on the Animal Kingdom,” discussed several aspects of the relationship between Judaism and nature, including the process of identifying animals of the Torah and their symbolism and the Jewish perspective on human interaction with the animal kingdom.

In the evening, Rabbi Slifkin explained the various theories of evolution and explored potential conflicts between these meanings and Torah in his lecture “Untangling Evolution.”