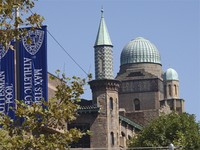 Dec 9, 2003 — In 1928, the building at 2540 Amsterdam Ave. – then known as the Main Building – opened its doors. The first group of YU buildings erected on 186th Street and Amsterdam Avenue and the original home of Yeshiva College, the structure was designed by Charles B. Meyers Associates in a Byzantine style to reflect the Jewish style of architecture. It has been called one of the great romantic structures of its decade by the American Institute of Architects’ Guide to New York City.

YU received a $1 million gift from Joseph and Faye Tanenbaum of Toronto, for whom the building was named in 1978 until 1994, when the named reverted back to the Main Building. In 2001, the name was once again changed to David H. Zysman Hall after Mr. Zysman, YU’s vice president for development from 1983 to 1994.