A Biblical Translation in the Making, by Richard C. Steiner Opening the Gates of Interpretation by Mordechai Z. Cohen

A Multi-Faith Approach to Scripture 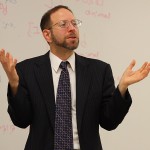 Dr. Mordechai Cohen, a leading world scholar of Jewish Bible interpretation, has taught at Yeshiva University for more than 23 years. Last year, however, this popular professor went off campus. Specifically, Cohen was in Jerusalem, where he devoted his efforts to an entirely different scholarly project than his usual research on the Hebrew Bible and its classical commentators, but that drew upon his academic background and administrative skills.Cohen has served as associate dean of YU’s Bernard Revel Graduate School of Jewish Studies since 2008, appointed at the invitation of then newly installed Dean David Berger, and has spearheaded the school’s rejuvenation on many levels—academic, social and communal. Cohen organized, directed and was a key participant in an international team of 14 leading scholars of Jewish, Christian and Muslim interpretation—as well as its relation to literature, literary theory and legal hermeneutics—that gathered in Jerusalem for a six-month collaborative research project.

The project was titled “Encountering Scripture in Overlapping Cultures: Early Jewish, Christian and Muslim Strategies of Reading and Their Contemporary Implications” and its extraordinary interdisciplinary findings will be presented in a scholarly volume consisting of a chapter from each group member. The book is being edited by Cohen together with Adele Berlin, Emerita Professor of Hebrew Bible at the University of Maryland and a member of the research group.

The group of scholars, hailing from the United States, Israel and Europe, convened at the Hebrew University of Jerusalem’s Institute for Advanced Studies (IAS) from September 2010 through February 2011. The work of this research group at the IAS was academic and not of a religious or interfaith nature. Its purpose was to engage in a close comparative analysis of shifting cultural encounters with Sacred Scripture—the Hebrew Bible, the Christian Bible and the Qur’an—in the three overlapping faith communities. Cohen directed the group together with Meir Bar-Asher, professor of Islamic studies at Hebrew University and a world expert on Shiite Islam.

There were practical hurdles to overcome in planning this collaborative research project and organizing the group’s six-month stay in Jerusalem. In the world of academics, interdisciplinary analysis of scriptural interpretation in the three Abrahamic faiths is a rarity. Rarer still is the ability to convene scholars in each of these fields for such an extended period of time. However, Cohen took on the challenge, predicting promise in engaging scholars with a spectrum of specialties. 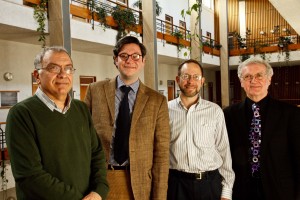 “It takes many years to become proficient in the tradition of scriptural interpretation in any one faith community, requiring mastery of old languages (Hebrew, Greek, Syriac, Latin, Arabic) and complex hermeneutical traditions—in Hazal and Rishonim, the Church Fathers and medieval expositors, and Hadith and Tafsir literature,” said Cohen. “Our group had the benefit of the presence of top scholars in all of these fields, enabling us to compare and exchange views at the highest academic levels.”

The group identified previously unrecognized connections among the three faith communities and came to appreciate differences that separated them. As an example, Cohen points to an intensive two-week period of lectures devoted to parallel conceptions of the “literal sense” (Hebrew peshat; Latin senus litteralis; Arabic zahir, haqiqa) that emerged in the medieval period in Judaism, Christianity and Islam. On the other hand, the notion that Scripture is the prime source of law (religious and civil) is common to Judaism (halacha) and Islam (shari‘ah), but foreign to Christianity.

Cohen’s own research emphasizes the connections between Judaism’s tradition of scriptural interpretation (parshanut hamiqra) with ways of understanding Sacred Scripture in Islam and Christianity. His published work reveals, for example, how Maimonides synthesized various elements from Arabic learning to create a well-defined interpretive theory—the subject of his most recent book, Opening the Gates of Interpretation (Leiden: Brill Academic Publishers, 2011). “Understanding Maimonides’ intellectual milieu was a key that opened up so many locked doors,” said Cohen, who expected similar benefits to all members of the group when they saw the traditions they studied with the added benefit of the areas of expertise provided by other group members. 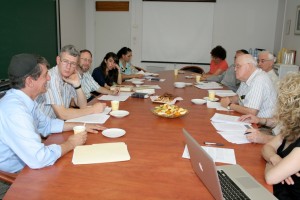 Cohen along with members of the IAS research group

And this prediction came true in spades. Citing just one example, Cohen notes a fascinating parallel the group discovered between Rashi’s critical citation of midrashic literature and the biblical commentaries of his contemporary St. Bruno of Cologne (1030-1101), the highly influential founder of the Carthusian monastic order and Master at the Cathedral School at the important city of Rheims, just 65 miles from Rashi’s native Troyes. Bruno was revolutionary in incorporating in his commentaries only those interpretations of the Church Fathers that take into account “the letter” of Scripture and the “continuum” of the verses. Rashi likewise selected midrashic commentaries of the Rabbis that correspond reasonably to what he refers to as leshon ha-miqra (“the language of Scripture”) and seder ha-devarim (“the order of the words”).

The core academic activities of the group while at the IAS consisted of weekly seminar meetings and an intensive four-day conference in January. While in Jerusalem, each member gave two or three substantial papers presenting his or her latest research—often on quite different subjects. The diverse makeup of the group fostered what Cohen describes as “an unparalleled atmosphere of interdisciplinary research, broadening the academic horizons of all of our participants.”

The project was an enriching experience for Cohen in other ways, too, as he was pleasantly surprised to discover another, more institutionally based parallel between Jewish and Christian learning. Cohen, who has semicha [rabbinic ordination] from YU-affiliated Rabbi Isaac Elchanan Theological Seminary (RIETS), formed a special personal bond with Sidney Griffith, an ordained Catholic priest as well as Ordinary Professor of Semitic Languages at the Catholic University of America. As Griffith informed him, Catholic University, which also has a theological seminary, faces parallel ideological challenges to Yeshiva University with regard to the integration of academic and religious study, and between sacred and secular learning—what would be called Torah Umadda at YU.

Of course, visiting the Holy Land for half a year without sightseeing could be labeled scandalous; the group of scholars—some of whom were visiting Israel for the first time—also had the opportunity to go on organized trips to sites of Jewish, Muslim and Christian interest.

Toward the end of the six-month research project, Cohen presented some of the group’s findings to an audience of 150 in a public lecture—introduced by YU President Richard M. Joel—on January 24, 2011. At the event, which prompted numerous questions, Cohen highlighted the general relevance of the project to a diverse cross-section of the broad Jerusalem community.

The cooperative project that began in Jerusalem is ongoing. Apart from the volume—consisting of essays by all of the participants of the group based on their presentations—that Cohen and Berlin are currently editing, a follow-up conference is scheduled for July 2012 in Jerusalem that will bring the group together again to explore how their initial comparative project at the IAS has informed their subsequent scholarship.